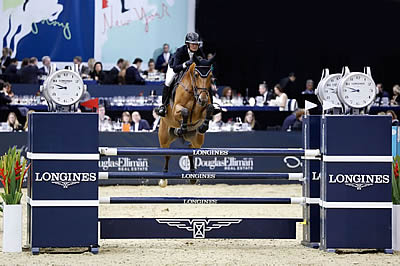 Canada’s Erynn Ballard (CAN) emerged victorious riding Fantast in the $100,000 Longines Speed Challenge at the Longines Masters of New York.  It was an all-female podium finish as the women outran the men in one of the only Olympic sports where the sexes compete as equals.  Contesting the identical track that riders already faced in the Season III Longines Masters of Paris and Hong Kong, Ballard’s speed prowess allowed her to take a two-second penalty for a dropped rail yet still emerge victorious with a time of 60.62 seconds.  Considered the world’s speed championship, Ballard’s time in the Longines Speed Challenge was faster than the 60.99 achieved by Julien Epaillard on home ground in Paris and eclipsed the time of 63.47 that Philipp Weishaupt of Germany posted riding Chacon in Hong Kong.

“The Golden Hat Foundation is a non-profit organization dedicated to changing the way people on the autism spectrum are perceived, by shining a light on their abilities and emphasizing their potential. With proper education and career training, these individuals can truly realize their dreams. Tonight is a shining example of how organizations, like Longines and the Longines Masters of New York, can make an impact to further Autism Awareness in their community,” said Winslet.

New York’s Brianne Goutal-Marteau (USA) kept all the rails in place aboard Fineman, owned by Rose Hill Farm, but finished more than a full second behind Ballard’s time, stopping the clock in 61.86 seconds.  As the first rider on course, Kristen Vanderveen (USA) set the early pace with a time of 62.04 seconds that kept her on the podium in third place with Bull Run’s Faustino de Tili.

“I don’t think there’s anything better!” said Ballard of her Longines Masters debut.  “I was excited to ride here tonight in front of a big crowd; they were cheering for you and cheering for Canada.  As soon as you walk in the ring, you are excited to be here.  It’s really an honor.”

Speaking of the key to her victory with the13-year-old Belgian Warmblood stallion owned by Sagamore Farms, Ballard said, “I think the biggest difference is that my horse has so much natural speed.  His legs are fast, he has a big-stride, and he can turn fast.  I think we won from start to finish.  He’s that fast!”

Gregory Wathelet stood atop an international podium following his sensational win in the $35,000 Masters One Douglas Elliman Real Estate 1.50m on Friday evening, April 27, at the Longines Masters of New York. As the first of six riders to contest the shortened jump-off track set by Dutch course designer Louis Konickx, Wathelet laid down the gauntlet by steering Iphigeneia de Muze to a clear round in a time of 31.74 seconds. None who followed was fast enough to catch the Belgian Olympian, with French speed master and 2014 World Championship double silver medalist Patrice Delaveau posing the biggest threat with a time of 32.13 seconds aboard Aquila HDC, a 13-year-old Dutch Warmblood gelding owned by Haras des Coudrettes. Canada’s Erynn Ballard ensured podium representation from north of the U.S. border by taking third with Catoki’s Son Z for owners Ilan Ferder and Tal Milstein.

“She is ten, but she hasn’t done so much at this level,” said Wathelet of his winning mount, a 10-year-old Belgian Warmblood mare owned by Dawa Invest – JL Horses. “I have had her for three years, but I took my time. In the last few shows she got better and better. This was the first time she has been on the plane and I was a bit worried, but she did fine.

“We are all familiar with the Longines Masters in Paris and Hong Kong and this is the same concept with a big show that has a great atmosphere,” continued Wathelet. “This is new and the place is good. I hope the weekend brings the same kind of atmosphere as Paris because that is what makes a show!”

Los Angeles, CA native Mavis Spencer dominated the jump-off of the Masters Two Eastern Hay 1.45m competition to earn her first win at the Longines Masters of New York. Riding Sweet Tricia, a nine-year-old Dutch Warmblood mare that she characterizes as having everything one looks for in a top horse, Spencer bested a three-horse jump-off with a double-clear performance in 39.10 seconds.

“I did the Longines Masters of Los Angeles two years ago and I think it is incredible to have the European environment and horse show that they are able to create here,” said Spencer, whose family spends a lot of time in New York, making it her second home. “This is a super venue and the Longines Masters has done a really nice job. I was really excited to be able to come and show here in New York.”

Joining Spencer on the podium, New York, NY resident and trainer at Old Salem Farm in North Salem, NY, Lucy Davis (USA) rode Cassis 54 to second. They were also clear over the short course in 44.27 seconds. Canada’s Bretton Chad rounded out the top three with The Pugilist on five faults.

Jonathan Corrigan won for his home country of Ireland in the first class of Day 2 at the Longines Masters of New York on Friday, April 27. Fifth in the ring from a field of 21, he claimed the Masters Two Écuries d’Ecaussinnes 1.35m accumulator competition with a clear round for 65 points – the class sponsor is the breeding and sport stable founded in 1997 by Christophe Ameeuw, CEO of EEM. A time of 44.14 seconds riding Javas Keltic Mist, a 12-year-old Irish Sport Horse gelding, gave the Irish duo the win. Also jumping clear for podium appearances, Tori Corts (USA) took second on Chellini and Cara Raether Carey (USA) finished third riding Cocarie.

For the second day in a row, Summer Paulos stood atop the Longines Masters of New York podium after winning the Masters Three The Fuel Stop 1.25m speed competition. Hailing from Newtown, CT, Paulos and Balans RV, a 12-year-old Dutch Warmblood gelding, topped the field by recording a clear round in 49.53 seconds. The time was just over a second ahead of runner up and New York native Charles Stevens. He and Balando finished second, while Lilli Hymowitz took third riding Cylana.

Alexandra Cherubini Has the Speed

Speed was key in the Masters Three Old Salem Farm 1.15m competition. Alexandra Cherubini of Boston, MA had just that to top the field riding her own Lando, a 16-year-old Oldenburg gelding. They broke the timers clear in 49.03 seconds for the victory. Gabrielle Freund set an early lead as the first to go, but settled for second riding No Sunday Sales. Rounding out the podium positions was Grace Busch, who took third for the second day in a row aboard Royal Landor.