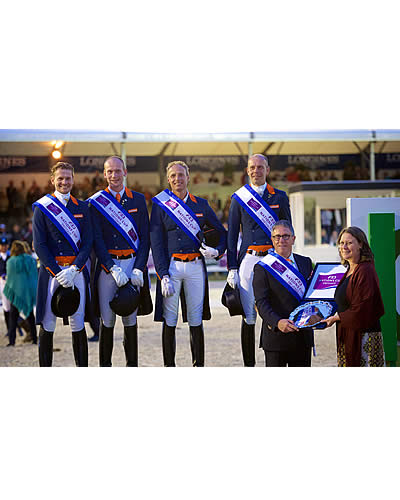 Rotterdam (NED), 21 June 2015 – The defending series champions from The Netherlands made it a back-to-back double on home ground at the third leg of the FEI Nations Cup™ Dressage 2015 pilot series in Rotterdam, The Netherlands yesterday. With another new format on trial at this event, the competition began with a Grand Prix team competition on Thursday, from which riders representing the five leading nations went through to Saturday’s Grand Prix Special and Freestyle.

The consistent Dutch pipped Sweden by a decisive margin of almost 2.5 per cent, but Sweden’s Patrik Kittel and his 16-year-old campaigner Watermill Scandic were the show-stealers when producing the highest individual score in the Grand Prix – 77.260 – and then topping the Freestyle with a mark of 81.875.

Third place in the team competition went to the USA, with Belgium lining up fourth and Germany in fifth. Only riders from the leading five nations qualified for Saturday’s Special and Freestyle in which two from each side were eligible to compete in each class. Lying fifth, the three-member German team was already at a disadvantage, and when Bernadette Brune retired after running into problems with Spirit of the Age OLD in the Freestyle, Germany was eliminated. In sixth and seventh after the opening Grand Prix, Great Britain and France failed to make the cut into the closing stages, but their scorelines indicated the close nature of the competition, with the British completing on a total of 68.967 and the French on 68.933.

The FEI Nations Cup™ Dressage series is now in its third pilot season and continues to provide both valuable exposure for up-and-coming horse-and-rider combinations and the perfect stage for top teams to test out the form of their leading combinations. And the crack Dutch team that included Olympic and World Championship-level riders always looked formidable.

They established a firm grip at the top of the leaderboard when filling second, third, fourth and fifth places in the opening Grand Prix. And when Diederik van Silfhout (Arlando NOP) and Patrick van der Meer (Uzzo) scored 77.098 and 74.429 respectively for first and second places in the Grand Prix Special, and then Hans Peter Minderhoud (Glock’s Johnson TN) and Edward Gal (Glock’s Undercover NOP) slotted into second and third in the Freestyle with marks of 81.050 and 77.900, they had it all sewn up.

Dutch Chef d’Equipe, Wim Ernes, reflected on the result. “For my team it was a good performance. Edward’s result was a bit below the normal level – there were moments of tension. The rest were good performances and Hans Peter had the best result in the Freestyle; his horse just keeps improving. Patrick has been doing well since competing in Aachen, and Diederik stayed at his normal level so I’m happy,” he said. “This was an important show for us to look at our top riders, because we will be deciding the selection for the European Championships after the Dutch Championships take place,” he added.

He felt the decision to spread the competition over the three classes worked well. “I believe this format is a good new idea because it makes it more exciting – first the Grand Prix in which we will see a little bit the direction it will go, then the Special and Freestyle to decide the result. Breaking it up like that makes it more interesting for the public I think, and brings it to a more exciting conclusion.”

The Dutch might have expected to also produce the best individual performances, but Ernes said Sweden’s Patrik Kittel was “very impressive” with Watermill Scandic. “Patrik did a very good job in the Freestyle especially; he had some real highlights in piaffe and passage and he deserved to win!” the Dutch team manager insisted.

Kittel said he was really surprised by his own results. “It was very unexpected to win both the Grand Prix and the Freestyle! I can hardly believe we did that, but my horse is in great shape and the judges could see that and gave us some great scores!”

He believes a new routine for his horse has played a part in the results he is achieving. “I have found a really good system for Scandic. I don’t ask too much from him in training; he goes out in the field for half the day every day and that keeps him happy and fresh, and he goes to the spa and does a bit of jogging. He’s been showing fantastic form. He won the Swedish Championship a couple of weeks ago and before that went really well at Munich. He may be 16 years old now but he feels great!” said the man who has been crowned Swedish champion with this same horse for three consecutive years.

When asked if he would choose Watermill Scandic for the forthcoming FEI European Dressage Championships in Aachen, Germany, he replied, “I’m very lucky to have two good horses and I don’t think I will be asking him to do the Europeans, but he was unreal today and I’m so happy with him!” he replied.

The next two legs of the series will take place in Falsterbo, Sweden and Hagen, Germany between 8 and 12 July. For all information on the Swedish fixture, visit www.falsterbohorseshow.com or contact Press Officer Malin Fredriksson, Email press@falsterbohorseshow.com. For details of the German fixture, see www.cdio2015@hagen.de or contact Press Officer Anna Baden, Email anna.baden@psi-sporthorses.de, Tel +49 5401 364543.

7 nations competed and the winning team was from the host nation.

The competition format consisted of a Grand Prix team competition which took place on Thursday, with riders from the five leading nations then going forward to compete in Saturday’s Grand Prix Special and Freestyle.

2 riders from each of the leading nations competed in Saturday’s GPS and the remaining 2 competed in the GP Freestyle.