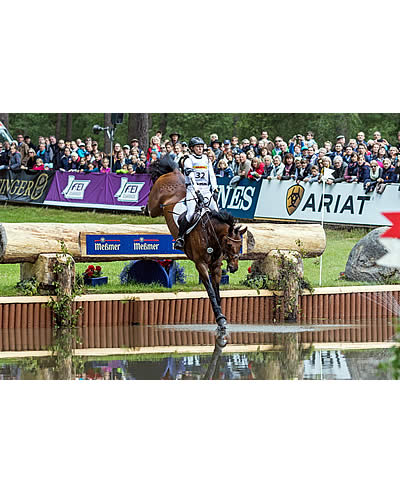 Lausanne (SUI), 20 June 2015 – Ingrid Klimke (GER) is on course to win her second CCI4* of the FEI Classics™ 2014/2015 after a breathtakingly bold Cross Country round on FRH Escada JS at Luhmühlen (GER), presented by DHL.

“Escada was super fit and she jumps so big that she goes over the top of the hedges,” said a delighted Klimke, who remains on her Dressage score of 32.7. “She loves it so much that we were flying. It was an incredible feeling.”

Jonelle Price (NZL), whose husband, Tim, won here last year, is now within touching distance of her first CCI4* victory after providing a masterclass of Cross Country riding on the quick grey mare Faerie Dianimo. They are now second, only 0.1 of a penalty behind Klimke going into tomorrow’s Jumping finale.

Price overcame an anxious moment when she was mistakenly held in front of the very last fence, but she managed to keep her focus amid the adrenalin high, and completed the course penalty free.

“I had a beautiful round until then with no nervous moments,” said Price. “Dianimo felt much more experienced than she did at Pau last year [where they were fourth].”

However, proving that even Olympic champions can have an off-moment, Jung retired the fourth-placed fischerRocana FST when the gallant mare floundered on landing in the water at Meβmer water complex and was unable to make the step out onto the bank.

The price of one Jumping rail covers the top five riders. The accomplished Australian Christopher Burton, twice a winner of Adelaide (AUS), moved up two places to fourth on Graf Liberty, a 10-year-old Irish Sport Horse having a first CCI4* run.

Sir Mark Todd (NZL) had a superb round on NZB Campino and is now fifth and in with a great chance of adding the Luhmühlen CCI4* to his illustrious CV after competing here for more than 30 years.

Mark Phillips’ revamped track proved a triumph, producing committed riding and confident horses from the star-studded field. There were 21 clear rounds from the 35 Cross Country starters, 14 of which were inside the optimum time of 11 minutes 10 seconds.

The Dressage leader, newcomer Julien Despontin (BEL), was visibly thrilled with his clear round, only his second at this level, on Waldano 36. He showed admirable stickability when the horse slipped on leaving the arena, but 22.4 time penalties has dropped him to 19th place.

New Zealanders Andrew Nicholson (Qwanza) and Blyth Tait (Xanthus lll), who was achieving his first CCI4* Cross Country completion since 2004, were both going brilliantly when they had frustrating run-outs just two fences from home at fence 28, the Ariat three angled horse-shaped brush.

Clark Montgomery (USA) successfully appealed against elimination for jumping the wrong side of a flag at fence 28 and he is now in seventh place overnight on Loughan Glen.

Lizzie Brown (NZL) and Henton Attorney General, 10th after Dressage, retired after a refusal going into the six-effort Meβmer water (fence 17), the centrepiece of the whole course, while Karl-Steffen Meier (GER) suffered the only fall of the day, a soaking in the water when Sunny Side First tripped on landing there.

The FEI Classics™ has been dominated since its inception in 2008 by British riders, with the notable exception of Andrew Nicholson (NZL) in 2013, but it now looks as if the Germans are about to take over; Klimke has the chance to build up a commanding lead and Michael Jung could be close behind by tomorrow.

“Escada is a neat jumper and I will just aim to keep her calm in the warm-up,” said Klimke, who won Pau last year and finished second at Badminton on Horseware Hale Bob last month. “I have never won here before, although I had chances with [FRH Butts] Abraxxas, so it would be nice.”