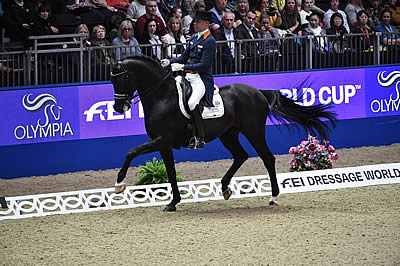 Olympia, The London International Horse Show opened its door for the first day of the week-long event. The UK’s largest indoor Show saw many of the world’s best Dressage riders out in full force for the newly formatted FEI Dressage World Cup™ Grand Prix supported by Horse & Hound, which saw Hans Peter Minderhoud clinch the victory with a score of 73.895%. Great Britain’s Charlotte Dujardin finished close behind on a score of 73.026% to take second.

The Osborne Refrigerators Shetland Pony Grand National got off to a flying start as Olive Nicholls, daughter of renowned racing trainer Paul Nicholls, stormed her way to victory, taking the first win of the week. The Grand Hall also applauded a welcomed-return of La Garde Républicaine for the premier evening of the Show, as they displayed their impressive routine to the evening’s spectators.

Dutchman Hans Peter Minderhoud and the young stallion Glock’s Dream Boy NOP stole the first win of the show, The FEI Dressage World Cup Grand Prix supported by Horse & Hound, at Olympia, The London International Horse Show. It was also the first win at Olympia for Minderhoud who has been second and third on previous occasions.

The combination headed off British golden girl Charlotte Dujardin, who for the show was paired with Hawtins Delicato, the team horse of her mentor Carl Hester. Dujardin and ‘Del’ had the debatable honour of being the first in the class, meaning they were the first ever combination to ride the newly designed and shortened grand prix being piloted at the show, as part of the FEI Dressage World Cup package. The revamp also included an immediate after test dismount and spotlight interview in the arena before the five judges’ scores were revealed.

“It was all very new and different to what we have been used to, but for me it was a really cool moment when the scores came up and I was very happy,” said Minderhoud.

Dujardin was also pleased with her ride and place, especially as she was the test guinea pig.

“I didn’t have the chance to watch anyone ride through the test and Del has never been to an indoor show like this, so I was pleased with him,” said Dujardin.

“Getting off the horse in the arena and having an interview straight away took me back a bit but it was great to have the support of the crowd.”

German debutant Frederic Wandres and the chestnut gelding Duke of Britain claimed an impressive third place on their first visit to the show. The pair produced a fluent test which could have scored higher but for mistakes in the two tempi changes.

“When I saw the arena for the first time, I thought it was just breath-taking,” said Wandres who enjoyed the new test. “I have never been to a show like this before and it is the nicest show I have ever been to.”

“I was nervous about riding the new test, but for me it rode well and my horse coped with the movements and felt really good.”

British judge Stephen Clarke commented: “Yes, the test was quite difficult as the movements come up quickly and are short – it is undoubtedly easier to judge than ride. But the evening as a whole was great; there was a good crowd and you could really feel the interest and enthusiasm – it was a good evening for the sport.”