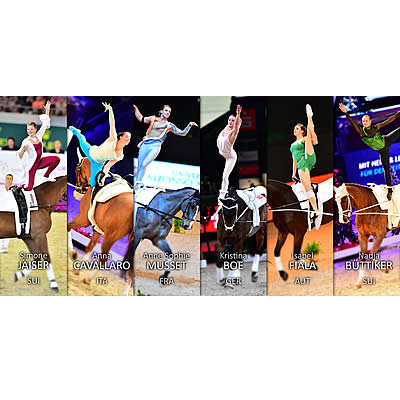 Lausanne (SUI), 2 March 2016 – The stage is set for a fascinating series of contests when the FEI World Cup™ Vaulting 2015/2016 Final gets underway in Dortmund (GER) tomorrow, Thursday 3 March. This is the sixth season of World Cup competition in this discipline which has grown a big audience in recent years, and which continues to attract top athletes whose courage, skill and determination are tested to the limit every time they compete.

The qualifying rounds were filled with drama, as well as great sport, and as the 2016 Final plays itself out over the coming days plenty more of the same can be expected. Performing demanding gymnastic and balletic movements on a cantering horse is no easy feat, and the level of excellence required to take any one of the three titles on offer is very high indeed.

A total of six Male and six Female vaulters have made the cut for the Final, along with four Pas-de-Deux partnerships, and the pressure will be intense from the moment the Warm-up classes begin tomorrow evening.

It’s likely to be a game of cat-and-mouse between Switzerland’s Simone Jaïser and Italy’s Anna Cavallaro in the battle for the Female title.

Both athletes have scores to settle, Jaïser pinned into runner-up spot at the 2015 FEI World Cup™ Vaulting Final by the back-flip queen, Austria’s Lisa Wild, who reigned supreme on home turf in Graz 12 months ago.

Cavallaro, meanwhile, had to settle for silver behind Jaïser who claimed gold at last summer’s FEI European Championships in Aachen (GER). However, the Italian came out on top on the only occasion they pair met during the current season’s qualifying series at Salzburg (AUT) last September. Cavallaro’s winning margin was a very narrow one, but suggests that Jaïser will need to remain right at the top of her game if she is to claim the FEI World Cup™ Vaulting title this time around.

With three wins from four starts Jaïser looks favourite at the outset but, along with Cavallaro, Anne-Sophie Musset from France, Germany’s Kristina Boe, Isabel Fiala from Austria, and Switzerland’s Nadja Büttiker also have the coveted Female trophy in their sights.

Germany’s Jannis Drewell is the unchallenged favourite in the Male Division, having followed his gold-medal-winning performance at the FEI European Championships 2015 in Aachen with a runaway three wins from three starts during the new FEI World Cup™ Vaulting season. He has consistently been awarded big scores from the judges who are just as impressed by his physical strength as they are by his artistic programme which allows him to express his infectious youthful enthusiasm. Adored by the spectators wherever he goes, the 24-year-old can be expected to electrify the Dortmund arena from the moment the warm-up gets underway on Thursday.

However, Drewell’s German compatriot, Daniel Kaiser, who topped the podium at the opening leg of the series in Madrid (ESP) in November, has a great deal more experience and mileage on the clock, and along with French vaulters Clement Taillez and Vincent Haennel, Switzerland’s Lukas Heppler and Lukas Klouda from the Czech Republic, Kaiser will be determined to keep plenty of pressure on his fellow-countryman.

In the Pas-de-Deux, the reigning European silver medallists, Germany’s Pia Engelberty and Torben Jacobs, may well prove the ones to beat. The consistency of their quality performances, which earned them a double of wins during the qualifying season, is unquestionable, but they are likely to face serious opposition from all three opponent pairs.

Italy’s Erika Di Forti and Lorenzo Lupacchini were hampered by a fall at the last qualifier in Leipzig (GER), but it is incidents such as this that separates the true champions from all the rest. The age-old saying, so clearly understood by equestrian athletes in all disciplines, is that when you fall then the very first thing you must do is climb back onboard right away. And the young Italians did just that to retrieve the situation as best they could to finish second behind Engelberty and Jacobs.

The American sister-act of Kimberly and Cassidy Palmer also suffered the same fate in Paris, but they are always an exciting combination to watch and with the German duo of Jolina Ossenberg-Engels and Timo Gerdes also in action over the coming days, the Pas-de-Deux competition look set to make a big impact.

The full list of qualified vaulters, calendar of events, results and standings here.