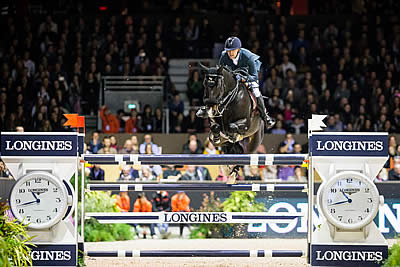 Simon Delestre (FRA), the new world Jumping number one at the top of the Longines Rankings, pictured on the stallion Qlassic Bois Margot in Bordeaux (FRA), last qualifier of the Longines FEI World Cup™ Jumping Western European League before the Final in Sweden. (FEI/Eric Knoll)

Delestre, who competed at his first Olympic Games at London 2012 with Napoli Du Ry, scored individual bronze at the FEI European Jumping Championships 2015 in Aachen (GER) and team silver at the Alltech FEI World Equestrian Games™ 2014.

He has made it to two FEI World Cup™ Jumping Finals, in 2014 in Lyon and 2011 in Leipzig, and is now in pole position for this year’s Final.

Simon Delestre has been immersed in equestrian sport since his childhood, when he watched his father Marcel compete.

His father, a national pony Jumping coach, and his close relationship with the pony Panama Cassou, owned by the French National Stud, were key to Delestre’s early career success. He won the national pony Jumping championships twice in a row in 1994 and 1995. In 1999, he scored individual gold at the French Junior Championships and team bronze at the FEI European Junior Jumping Championships. The following year, he won team gold at the FEI European Jumping Championships for Young Riders and in 2009 he finished top of the individual podium at the Mediterranean Games.