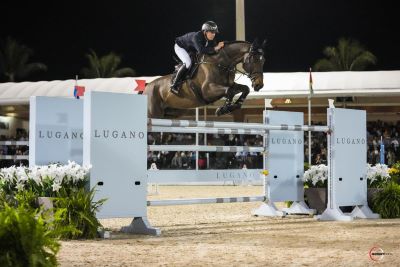 Anthony D’Ambrosio (USA) and Andy Christiansen (ECU) set a challenging track for the 40 entries in the “Saturday Night Lights” class. Five were able to go clear over the first-round course while 12 fell victim to just one rail down. Fifteen countries were represented in the grand prix order, with four flags in the jump-off.

Bliss Heers praised the course designers, saying, “It’s always tough building here because of the level of competitors and horsepower. You want something difficult enough, but not something that will scare the horses because you want to keep them confident that the Saturday night class is going to be a good class. They did a great job, and it was fair.”

First to return for the jump-off was Olympian Daniel Bluman (ISR) and Ladriano Z, a 14-year-old Zangersheide gelding by Lawito x Baloubet Du Rouet owned by Over the Top Stables LLC. With a rail for four faults and a time of 45.59 seconds, Bluman finished in fourth place.

Allen was next in, and he opened up Pacino Amiro’s giant stride to gallop across the jump-off clear in 44.14 seconds.

On Saturday in the FarmVet Ring, 16 horse-and-rider combinations took to the course in the Ariat National Adult Medal. Holding on to their lead with a high score of 87, Catherine Kramer, of Indianapolis, IN, and Gotye took top honors after further testing.

The top four were brought back to test in reverse order, entering the ring individually and immediately picking up the counter-canter on a direct route to their first fence. The additional testing began after the top four entries were called, the test read, and the announcement of “no further schooling” was made.

Kramer and Gotye, a 12-year-old Holsteiner gelding owned by Lisa Carlsen, have only recently started competing together, but have already had other successes, including wins in the Ariat National Adult Medal during WEF 6 and the Bruno Delgrange Palm Beach Medal during WEF 4.