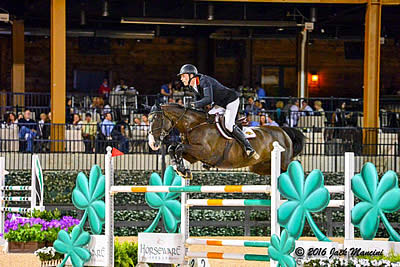 Mill Spring, NC – May 24, 2016 – David Blake continued his dominance at Tryon International Equestrian Center (TIEC) this past week, picking up another grand prix win aboard Baron in the $25,000 Odom Engineering, PLLC Grand Prix on Saturday, May 21. Blake, of Wellington, FL, piloted Baron to a quick jump-off round, finishing in 33.855 seconds to nudge Harold Chopping of Southern Pines, NC and Basje to second place, as they crossed the timers in 34.69 seconds. Manuel Torres of Leesburg, VA and Christofolini H rounded out the top three with a time of 36.826 seconds. Competition at TIEC continues this week with the start of Tryon Spring 6 on Wednesday, May 25.

Blake has finished atop the leaderboard with three different horses in the past two weeks, earning top finishes in the Tryon Spring 4 $10,000 Suncast 1.40m Open Welcome aboard Bella Donna, the Tryon Spring 4 $25,000 Tryon Resort Grand Prix aboard Park Lane, and this past week’s $25,000 Odom Engineering, PLLC Grand Prix with Baron, all owned by Pine Hollow Farm.

“This was Barons third time jumping under lights and each time he’s performed very well,” said Blake. “He loves the atmosphere here and really steps up during the bigger occasions. His form has been great these past couple of months and I knew he was knocking on the door for a nice win.”

The course, designed by Pierre Jolicoeur (USA), saw 20 entries test the first round track, while six combinations tackled the first round with ease, to move forward to the short course. Only the top three finishers completed the evening under the light in the George H. Morris Arena with a double clear effort.

“The time allowed in the first round was a little tight so you had to be thinking about that when you were going around,” he explained. “He [Pierre Jolicoeur] had an interesting open water option in the first round, which he also included in the jump off that was quiet unusual and was definitely something different than what you typically see in a jump-off.”

“It was quicker to jump the open water around the short course, but it made the inside turn afterwards quiet sharp, so it definitely added an aspect of difficulty if you were planning on taking the quickest route,” he continued.

Baron has been a reliable mount for Blake, as he competes the gelding in FEI ranking classes aside stable mate Binkie, who Blake has also experienced success aboard at TIEC. Baron, a 2006 Dutch Warmblood gelding (Ukato x Vera van Veecaten), finished the winter circuit with several top finishes, and Blake noted that the gelding feels confident and ready to tackle some of the bigger tracks this summer.

“He is probably the most rideable of my upper level horses, which makes it much easier to execute your plan around a technical course,” commented Blake. “It is a comfortable feeling for a rider to know you can shorten and lengthen his stride to overcome the more difficult aspects that a course of that size and nature will present.”

With a carefully planned schedule for each mount, Blake will continue to rely on both Baron and Binkie in upcoming FEI competitions that will begin at the venue the first week of June, while continuing to accumulate valuable mileage with Park Lane, Bella Donna, and Casinjo Ex Z.

“Baron will show again next week and we’ll look to secure another strong result in that class. Right now I want to get him more experience under the lights, specifically in preparation for some of the upcoming FEI weeks too,” he noted.

Kelley Farmer of Wellington, FL and Baltimore, owned by Jane Gaston, made an impressive statement in the $10,000 USHJA International Hunter Derby hosted at TIEC on Saturday, May 21. The competition, intended to begin under the lights in the George H. Morris Arena on Friday, May 20, was postponed to Saturday, May 21, after inclement weather forced a schedule delay.

Farmer, who has ridden Baltimore to several top finishes already this season, completed the two rounds of competition with a total score of 394 for the win. Jennifer Bliss of Wellington, FL and Poker Face, owned by Harris Hill Farm, LLC, collected second place with a combined score of 378, while Erica Quinn of Maineville, OH rode Need I Say, owned by Kelley Farmer, to third place with a score of 375.

“We got him [Baltimore] I would say maybe midway through the winter circuit in Florida and he’s been nothing but an absolute superstar,” commented Farmer. “He has really stepped up to the plate on all occasions and is just a super horse. He never lets you down and if he doesn’t win it’s not his fault.”

The winning duo earned consistent scores throughout the Classic and Handy rounds, which would ultimately give them a strong hold on the class. Farmer entered the Handy round in the lead aboard her veteran partners Mindful, but a small rider error led to an unfortunate stop on course.

Farmer explained, “With my handy round on Mindful, I really meant to approach the turn the same way I had on Baltimore, but I really didn’t give him enough time and it was my fault. There was a little bit of bad luck there, but I was really pleased with the way that they all went.”

Baltimore has been a strong addition to Farmer’s talented string of top hunters and Farmer believes that he has all of the right qualities to make him a strong contender in some of the larger derby classes approaching this summer and into the fall indoor season.

“He tries so hard for you in the ring and he always seems to do very well. He’s extremely careful and light on his feet so you can really do whatever you want with him in the ring,” she continued. “He’ll do Devon next week and then I’m thinking that I will bring him back for the $50,000 Derby here in Tryon in a few weeks since he enjoyed this class so much.”

For Farmer, the schedule change worked in her favor, as she originally was going to specifically choose which mounts she thought would excel in the electric atmosphere that the George H. Morris Arena provides under the lights. Instead, she was able to pilot four mounts, while Erica Quinn, who works for Farmer and Lane Change Farm, guided Need I Say to a respectable third place finish.

“I was really pleased with all of the horses to be honest. Erica rode Need I Say beautifully and it was really great. We came here last year for the big derby and the ring is just lovely,” commented Farmer. “We came in with a game plan for the night class, but all four horses ended up getting to compete, which was good. They all handled it very well and I was thrilled with everyone’s performance.”

Farmer will be back to the venue with a strong string of horses in just a few short weeks in attempt to repeat derby victories, as she will contest the $50,000 USHJA International Hunter Derby presented by Mirimichi Green on Friday, June 10.

“I cannot say enough good things about this horse show. The ring is fantastic; the footing in beautiful. I thought the jumps looked spectacular. Everyone here at Lane Change Farm absolutely loves showing at this venue and we’re really looking forward to coming back in a few weeks,” she noted.

O’Neal and Quilona Z laid down the fastest of five double clear rounds to earn first place, while O’Neal also piloted Capitano owned by TKO Partnership, to fourth place with a time of 40.39 seconds. The class saw 24 entries tackle the first round, which was designed by Pierre Jolicoeur (USA), while 12 combinations moved forward to the jump-off round.

Jennifer Bliss of Wellington, FL and Face the Music, owned by Harris Hill Farm, LLC, finished with a first place in the $1,000 USHJA Pre-Green Hunter Incentive with a score of 91. Jennifer Hannan of Wakefield, RI and Best Regards, owned by Patricia Fulchino, earned second place with a score of 87, while John Barker of Middleburg, VA and Calistro, owned by Sherri Crawford, rounded out the top three with a score of 86.

In the $1,000 Junior Hunter 3’6″ Classic, Bergen Sanderford of Santa Rosa Beach, FL finished in first and second place, respectively, winning aboard her own Mystical with a two round total score of 172 and placing second with her own Confidential with a 169. Devin Seek of Ocala, FL piloted At Last, owned by Century Performance Horses LLC, to third place with a score of 168.

Emma Marlowe of Lake Balboa, CA and Spalding, owned by Donald Stewart, took top honors in the $1,000 Junior Hunter 3’3″ Classic with a score of 172. Claudia Pollex of Troutman, NC and her own Mylo Xyloto earned second place with a 165, while Marlowe also picked up third place aboard Just Sayin, owned by Fairfield Farms LLC, with a score of 162.

In the WIHS Pony Equitation class, Jessie Marie Spade of Terrell, NC and her own With Applause captured top honors, receiving an 88, while Libbie Gordon of Statesville, NC and her own Tiffany Blue finished in second with a score of 86. Gigi Manigault of Charleston, SC and Marvel Comic, owned by Patti Manigault, earned third place with an 84.

Julia Schaumann of Palantine, IL and her own Cavallino rode to victory in the Ariat Adult Medal, receiving a score of 80. Courtney Canizares of Coventry, RI and her own Keira collected second place with a score of 79, while Madeline Pierce of Columbus, OH and Manhattan, owned by Arris Farms, Inc., finished in third place with a 78.

Carly Hoft of Rolesville, NC and her own Cashman took home a major win in the Platinum Performance USEF Show Jumping Talent Search 2*, while Melissa Deryn Foster of Langley, BC and Startin’ Monday, owned by Donald Stewart, finished in second place. Julia Curtis of Villa Rica, GA and her own Rocoso earned third place in the competitive class, which saw 14 entries.

For more information on Tryon International Equestrian Center and to see a full list of results, please visit www.tryon.com.