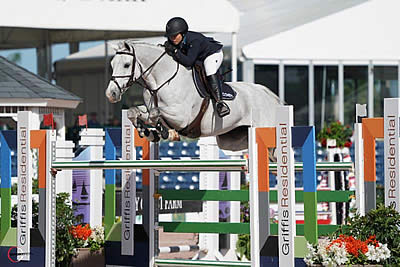 Wellington, FL – March 10, 2019 – Forty-five entries lined up for the chance to be named the winner of the $50,000 Griffis Residential Grand Prix CSI 2*. Of those 45, 10 went on to increase their chances by qualifying for the jump-off, and there were six double clear rounds.

The fastest of those was 18-year-old Samantha Cohen riding Carmen (a 12-year-old KWPN mare by Whitesnake x Corland), who stopped the timers in 37.56 seconds to take the victory as the first ones into the jump-off.

“I was first to go and nine were after me, with so many fast riders. I just wanted to go in and give it my best shot,” said Cohen of her jump-off ride. “She’s really quick around the turns, and she’s deceptively fast. She doesn’t ever look like she’s really running. I was really happy when I came out, but I was not sure it would hold.”

Out of 42 entries competing over a course set by Alan Wade of Ireland, 16 were clear to contest the jump-off. Riding out of the second position in the jump-off order, Olympic team gold medalist Ward and HH Gigi’s Girl put in a blazing fast time of 33.36 seconds that couldn’t be caught. There were seven double clear rounds in the class.

Coming closest was William Whitaker (GBR) on RMF Echo, owned by Rushy Marsh Farm LLC. They were clear in 34.51 seconds. Third place went to Erynn Ballard on Ilan Ferder’s Ceitasi, who had a time of 34.89 seconds.

“The jump-off was actually set up pretty nice for her; it was a good track for her strength,” said Ward of the 11-year-old KWPN mare by Vingino x Celano.

The pair placed four points ahead of the week’s reserve champions after winning three of the five division classes and ending on a total of 30 overall points.