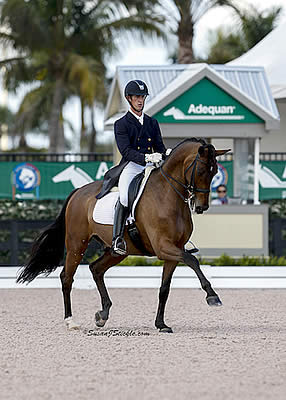 Wellington, FL – January 8, 2015 – Chris Von Martels (CAN) and Zilverstar finished the last day of competition at Week 5 of the Adequan® Global Dressage Festival (AGDF) with a win in the FEI CDI 1* Intermediaire 1 Freestyle presented by Mission Control. Von Martels and Zilverstar finished the afternoon on a 75.650% followed by Olivia LaGoy-Weltz (USA) and Rassing’s Lonoir scoring a 71.184% and Dawn White-O’Connor (USA) and Aristo coming in third with a 71.400%.

Von Martels was very happy with his test today and felt Zilverstar got better with each test in Week 5. The pair placed 5th in the Prix St. Georges on Thursday, 7th in the Intermediaire 1 on Friday, and finished the week off with a win in the Freestyle.

“I was thrilled with Zilver. He was totally on his game and he was able to show a lot of his strengths and highlights throughout the tests, which is always a really nice thing to accomplish,” he said. “He was fantastic throughout the whole week, so I’m really pleased with everything.”

As the pair looks to qualify for the Pan American Games, Von Martels feels like he has a good idea of where he needs to put in work to prepare.

“With every show you go home with a little bit of homework. For instance, I rode quite early in the class and the morning in the Intermediaire, it was cold and windy and I could have used 5 to 10 more minutes in the warm-up to get that focus,” he explained. “Those are the little details you always need to pay attention to and use to your advantage the next time.”

The extremely talented gelding continues to grow stronger and Von Martels expects big things to come from Zilverstar in the future.

“I’ve been riding him for three years now and he just has so much quality. He’s very sensitive and intelligent. It’s actually quite fun because when you have a horse like that and you do build a relationship, in the long term it gives you a lot more,” Von Martels expressed. “He does have quite a few highlights and strengths. His extended trot and his half-passes and his pirouettes and flying changes can be brilliant when he is in his best form.”

LaGoy-Weltz and Rassing’s Lonoir also finished in great form, after a competitive week of competition in the CDI 1* Small Tour classes. “He was a really good boy today. He was very quiet and soft and did everything I asked. We had one mistake but we need to tweak the choreography and work on that because it was a mistake that we usually don’t make and we need to make the music a bit more complementary,” she explained.

Rassing’s Lonoir, a 2004 Danish Warmblood gelding, is a very large horse and LaGoy-Weltz really focuses on making sure “Lono” is relaxed and rideable, also helping him to control his range of motion.

“I think the rideability is so nice because he can be really hot and it’s nice to have him simmer down in the ring. We’ve really focused on the rideability and relaxation because I can really push for things,” she commented. “I think the pirouettes are always something we can work on because he is such a big horse. It is about trying to get him where we can really get him to come on the spot and we’re always working on the straightness in the changes.”

The pair will aim towards qualifying for the Pan American Games before making the move to Grand Prix.

“Right now we have to see about Pan Ams because if we qualify we will focus on that. If we weren’t to make the qualifications then we would turn our focus to the Grand Prix, but we will definitely be showing more and hopefully do the Nation’s Cup,” she said, describing the pairs future plans.

Dawn White-O’Connor and Aristo finished in third, scoring very impressively for a relatively new freestyle routine for the pair. White-O’Connor, Steffen Peter’s assistant trainer, took advantage of her time in Florida with a solid week of performance.

“It was good. It was the first time I’ve done that freestyle and I changed it last week and we weren’t able to practice it a ton of times. We will change the choreography a little bit, but other than that I was very happy.”

The pair will stay in Florida for a few more weeks, changing their original plan of heading back to California this week.

“We were supposed to go back on Tuesday but we decided to stay and do the CDI here in two weeks. There are so many people in the classes in here compared to California. Just the number of horses and the quality make it great,” she stated.

Aristo, a favorite in the barn, is just starting to hit his peak with White-O’Connor. “He’s like a dog; he really has no concept that he’s a horse,” she laughed. “We will probably continue to do the Small Tour for the next CDI and then when we get home do a few more shows and see where everything works out too. I’d love to try a few Grand Prix’s with him at some local shows this summer.”

Today marked the last day of competition at Week 5 of the Adequan® Global Dressage Festival capping off a wonderful week of FEI CDI 1*/3*/5* competition sponsored by Mission Control, Wellington Equestrian Realty, and Diamante Farms, respectively. With more than eleven countries represented and more than 200 entries, AGDF Week 5 proved to be the biggest yet this season. The winners from this week’s special awards are as follows: “Best Horse Turnout” presented by Horse and Rider was presented to Alice Tarjan and Elfenfeuer, “Best Seat” presented by Kastel Denmark was awarded to Pablo Gomez Molina, and “Best Dressed Rider” presented by Tack N Rider went to Olivia LaGoy-Weltz. Felicitas Hendricks was awarded with the “Perfect Conduct” award sponsored by Perfect Products.