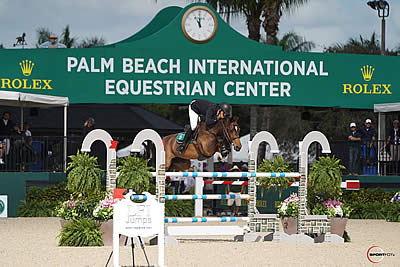 Jayne appeared in the middle of a 97-horse field over a two-phase course set by course designer Oscar Soberon (MEX). Tou La Moon, a 12-year-old Belgian Warmblood mare (Toulon x Skippy II) owned by Alex Jayne and Maura Thatcher, carried Jayne clear over the first phase and stopped the clock with more than a second to spare in 27.80 seconds over runner-up Stella Manship (USA) riding Dundalk, owned by Elan Farm.

“I am going on my fifth year with this horse, and she is really starting to peak at the higher level,” said Jayne, who found Tou La Moon as a five-year-old from her breeder Wilfred Cerpentier in Belgium. “Last year, she jumped probably 10 national grand prix and FEI ranking classes, and won four, so she’s really on a heater.”