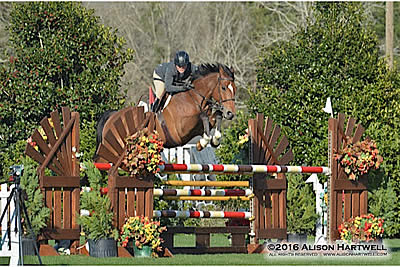 Penny Brennan of Buhl, Alabama won the $10,000 Horseflight Open Welcome Friday afternoon with Sun Tzu and continued her Week III winning streak in the irons of her own Japan.

The first round time allowed was set at 89 seconds. Thomas Welsh of New York, New York and his own Prosper were the first to go clean in a time of 82.583 seconds. Although the pair turned in a second round in a time of 33.713 seconds, four faults would see them finish in tenth place.

Margaret Camp’s Charmeur, ridden by Holly Shepherd of Grand Bay, Alabama, was the next to turn in a clean first round in a time of 88.704 seconds, but their second round in a time of 34.125 seconds and four faults would have them finishing behind Welsh in eleventh place.

The next clean first round was Honorway Farm, LLC’s Undercover, ridden by Leann Kelly of Valatie, New York, posting a time of 82.928 seconds. Their clear second round in a time of 34.810 seconds took the lead and set the new time to beat.

Abby Maxwell of Cedar Rapids, Iowa and her own Kidogo followed Kelly with double clear rounds in times of 85.884 and 35.875 seconds, respectively, temporarily landing in second place.

Francois Lamontagne of Saint Eustache, Quebec, Canada and his own Vigo Massuere were the next pair to turn in double clear rounds and stole the lead from Kelly and Undercover after posting times of 87.092 and 31.136 seconds.

Quincy Z, owned by Molly Gist and ridden by Sarah Invicta Williams, turned in a clean first round effort in a time of 81.643 seconds, but four faults and a time of 32.681 seconds in their second round would see them finish in ninth place overall.

Shepherd and Dejan Krunic’s Belle Clara DKS gave Brennan and Japan a run for the money and posted double clear rounds in times of 89.756 and 30.363 seconds which moved them into second place behind Brennan.

Cathleen Driscoll of Elk Mills, Maryland and her own Forever Blue turned in the next clean first round in a time of 82.360 seconds, but twelve jump faults in a time of 31.739 second would find them finishing in twelfth place overall.

Kelly returned to the grand prix field, this time in the irons of Sarah Hunter’s Graf Joe, as the last to go and turned in double clear efforts in times of 84.960 seconds and 32.443 seconds, which would earn them the fifth place ribbon overall.

Final placings had Brennan and Japan the blue ribbon winners while Shepherd and Belle Clara DKS took second. Third went to Kemper and Riptide and fourth went to Lamontagne and Vigo Massuere. Kelly picked up fifth and sixth place ribbons with Graf Joe and Undercover while Maxwell grabbed seventh place with Kidogo.