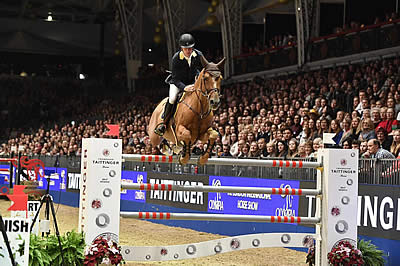 The crowds on day four of Olympia, The London International Horse Show were treated to some exhilarating Driving and Show Jumping performances, breathtaking displays from Santi Serra, La Garde Républicaine, The Kennel Club Dog Agility, and the Shetland Ponies, while more than 40 junior and senior medallists from Equestrian Team GBR took part in a very special parade in the Grand Hall.

Australian Boyd Exell demonstrated to Olympia’s admiring crowd precisely why he is the current and five-time world champion for four-in-hand Driving, putting on a masterful display in the Dodson & Horrell Extreme Driving – Top Score. Exell navigated the Johan Jacob-designed course with aplomb, completing the first round fault-free and more than 13 seconds ahead of his closest challengers, Dutchman Koos de Ronde and Belgian Edouard Simonet. With Simonet and de Ronde accruing four and eight-second penalties respectively in the drive-off, Exell showed his class, cruising over the finish line 10 seconds ahead of eventual second-placed driver Simonet.

The final event of the evening, The Ivy Stakes sponsored by Champagne Taittinger, proved to be a star-studded event, with six of the world’s top-10 ranked Show Jumpers vying for victory. But it was Irishman Shane Breen – currently 55th in the world rankings – who took the spoils. With 15 horse and rider combinations successfully navigating the Bernardo Costa Cabral-designed course and progressing to the jump-off, it was Breen who ultimately excelled, effortlessly steering his 13-year-old chestnut stallion fault-free around the demanding jump-off course in an unbeatable time of 33.41 seconds. Hot on Breen’s heels was Swiss maestro Steve Guerdat (Corbinian), who slotted into second spot just half a second off the pace, while third placed Norwegian Geir Gulliksen (Gin Chin van het Lindenhof) was a further second back.

This Kennel Club Medium Dog Agility Finals was won by Dawn Weaver from Dorset and her dog, Vegas, with the pair putting in the fastest clear round of the evening. Judge Martin Cavill put handlers through their paces resulting in only two dogs making it around the course without faults.

The afternoon performance of the Osborne Refrigerators Shetland Pony Grand National was won by Lucas Murphy and Shelcroft Buttercup, while the evening performance was won by Daisy Harrop and Cranford Fantastic.

Boyd Exell Puts On a Show

The crowd was treated to a spectacular start to the afternoon performance when Boyd Exell from Australia put on a masterclass in four-in-hand skills in the Dodson & Horrell Extreme Driving – Top Score, which determines the order of go in the World Cup competition. Exell, the reigning World Cup champion, was last to go of the seven contestants from six nations and finished the first round with 13 seconds in hand.

Second at this stage was the experienced Dutch competitor, Koos de Ronde, but his outstandingly fast round unfortunately included four knockdowns to add 16 seconds to his time. In third was young Belgian driver Edouard Simonet, a team and individual bronze medallist at the FEI World Equestrian Games™, who also went clear.

In the drive-off, Simonet and de Ronde both picked up penalties to reverse their positions. Exell again drove surely and cleanly until the very end where he picked up a four-second penalty, but he still cruised home 10 seconds ahead of Simonet.

The fast course set by Dutch designer Johan Jacob featured a new four-way crossing on the bridge with the start and finish occurring here. Newly designed elements in the obstacles gave a lighter appearance to the course and made for good viewing.

Breen, riding the 13-year-old Golden Hawk, was first to go in a marathon 15-horse jump-off, but no one could match his clear in 33.41 seconds, and the run of Irish luck continued after compatriot Darragh Kenny’s double.

In an international line-up, the 2012 Olympic champion Steve Guerdat finished second for Switzerland, 0.5 seconds in arrears on Corbinian. Geir Gulliksen was third for Norway on Gin Chin van het Lindenhof, formerly the ride of Ireland’s Bertram Allen, and riders from Portugal, France, and the Netherlands filled the next four places with Ben Maher the best Brit in eighth place.

Amazingly, this is Breen’s first full week at Olympia (he has competed in the Puissance before) and he revealed that the victory had cost him four watches – thinking it unlikely, he promised four children that he would buy them one each if he was successful.

“It looked a tricky enough jump-off course, but the horse got in a nice rhythm and it came my way,” said Breen.

The Gulliksen family have been long supporters of Olympia, so a first win for 22-year-old Johann-Sebastien Gulliksen in the Christmas Stocking Six Bar proved popular.

Four riders made it through to the fourth round, at 1.90m, but Gulliksen, riding the 13-year-old Arakorn, was the only one to go clear, as Belgium’s Olivier Philippaerts (H & M Extra) withdrew, Britain’s William Whitaker (Fandango) hit a fence, and Italy’s Luca Maria Moneta on a spooky Centimo retired after a refusal.

Gulliksen, who has been accompanying his father, Geir, to Olympia since a small child, said his horse had jumped 1.95m in Madrid a few weeks ago. “He really tries his best. It’s unbelievable to win here at Olympia. The crowd really gives you an emotional feeling.”

German Olympic rider Christian Ahlmann had a pleasant surprise in The Shelley Ashman International Shipping Ltd, E M Rogers (Transport) Ltd Snowflake Stakes when a horse that has only been jumping for a year carried him to victory in this speed class.

Atomic Z, a breeding stallion until last year, lacks the ring experience of other horses, but showed just how quick a learner he is when his round was fast enough to beat Britain’s William Funnell (Billy Angelo) by two seconds.

“It wasn’t planned at all,” said Ahlmann, “but when I went in, he felt so good that I went a bit quicker, and then a bit quicker still, because he is very flexible.”

A major highlight of the evening was the parade of British team medallists – British teams combined to bring back 24 championship medals this summer – headed by the gold medal eventing team. Individual world champion Ros Canter was presented with the BEF Medal of Honour, along with carriage driver Jill Holah and Para-Dressage selector Waveney Luke.