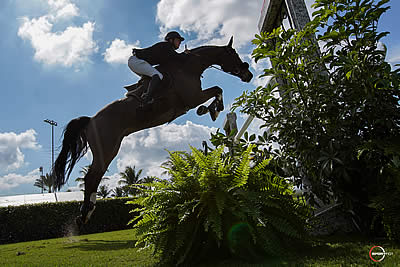 Wellington, FL – January 30, 2020 – Action in week four of the 2020 Winter Equestrian Festival (WEF) continued on the grass Derby Field at Equestrian Village (home to the Adequan® Global Dressage Festival) for the second day, with the $73,000 Equinimity WEF Challenge Cup Round 4 CSI4* on Thursday, January 30. Irish rider Bertram Allen continued his winning streak, leading the class of 54 on Ballywalter Stables’ GK Casper and making it two wins from two starts in two days on the turf.

Eight combinations made it through to the jump-off over course designer Anderson Lima’s (BRA) testing track. All eight jumped clear in the second round, so it all came down to speed to determine the finishing order. Allen, who had the benefit of being last to go, broke the beam in 39.00 seconds, with home rider Natalie Dean and Marigold Sporthorses LLC’s Jewel De Kwakenbeek nipping at their heels in a time of 39.02 seconds. Britain’s Amanda Derbyshire rode Gochman Sport Horses LLC’s Luibanta BH into third in 39.28 seconds.

“It’s a good start and long may it continue,” said Allen, 24. “I’m chuffed; he’s a good horse this one and very, very careful so you can really ride him at the jumps and normally he doesn’t have too many down.”

Undaunted, owned by Rock Ridge Farms, has just recently started his hunter career in the United States. He was purchased in Europe and came to the U.S. in the Fall of 2019. Farmer began showing Undaunted during the ESP Holiday Series at the Palm Beach International Equestrian Center. “He’s such a good horse and has been champion every time out except once,” Farmer explained.