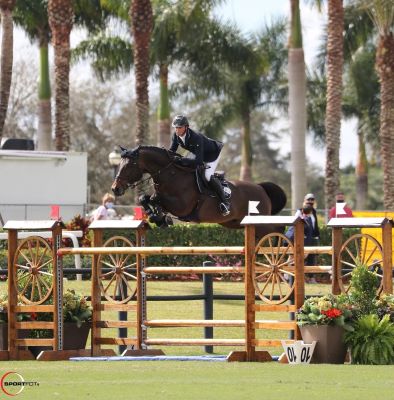 Wellington, FL – It was a thrilling finish for the final day of the second week of FEI competition at the 2021 Winter Equestrian Festival (WEF) as Olympic team gold medalist Ben Maher (GBR) and the 18-year-old stallion Tic Tac, owned by Jane Forbes Clark, edged the competition by just one one-hundredth of a second to take top honors in the $137,000 Restylane Grand Prix CSI3* on Sunday, January 24.

On the derby field at Equestrian Village, a total of 42 entries entered the ring to tackle the course designed by Oscar Soberon (USA) with 12 qualifying to return for the jump-off. Maher executed the track flawlessly aboard the SBS stallion by Clinton x Panama Du Seigneur, leaving all eight obstacles in their cups to secure the win in a blistering time of 43.56 seconds, just one one-hundredth of a second ahead of Canada’s Eric Lamaze.

Ashley Vogel Marks Another Win in the $25,000 FEI Hermès U25 Grand Prix

Notching their second U25 victory of the week, Ashley Vogel (USA) and her 2009 Zangersheide mare Bellissimo Z (Bamako de Muze x C’est Elle Z) flew through the jump-off timers in 39.10 seconds, solidifying the blue ribbon during their first week ever competing on the Derby Field.

It was a day of firsts for Mark Bluman (ISR) as he and his mount, the eight-year-old Noortje Vd Windheuvel owned by Over the Top Stables, LLC, flew to the top of the podium in the $30,000 CP Grand Prix, their first grand prix class together. They were also first to go in the starting order, first to return in the jump-off, and as luck would have it, they ended the class in first place with a double-clear effort in a time of 42.784 seconds.

“Since we got her I’ve been saying that she [was] one of the most talented seven-year-olds I’ve ever ridden,” he beamed. “She has a great attitude, she’s quiet, and she always wants to do a good job for you. She’s fast, scopey, and has all the qualities to be a real grand prix horse.”

The Belgian Warmblood mare by Farfleu De Muze x Calista Vd Windheuvel showed those aforementioned qualities as they raced around the shortened course with authority to solidify the win.