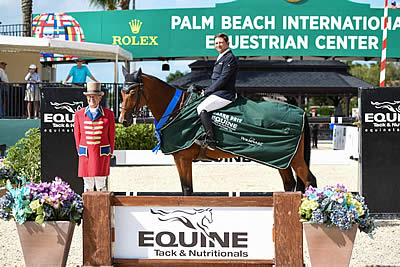 Wellington, FL – November 12, 2019 – The ESP Fall Series continued this past weekend with the ESP November show, taking place at the main grounds of Palm Beach International Equestrian Center. Alberto Michan of Israel maintained his winning streak, claiming top honors in Sunday’s $25,000 Equine Tack & Nutritionals Grand Prix, this time aboard Nilson Da Silva’s Zambia Mystic Rose. The pair flew through the timers in just 37.368 seconds after returning for the second round with only two other horse-and-rider combinations. Heather Caristo-Williams of Saugerties, NY was very close behind, finishing the jump-off track in 37.245 seconds with four faults, aboard Qui Vive Des Songes Z, owned by Mr. & Mrs. Ralph Caristo. Finishing in third place was Kyle Dewar of Ocala, FL and F Gunsmoke RHF, owned by Joan Burke, after a 39.719-second jump-off with four faults added to their score.

Course designer, Andrew Christiansen, set the track for a total of 20 competitors on Sunday afternoon. Only three pairs returned for the second round. Michan commented that he felt lucky [to win] because it was a very technical course: “Especially that triple combination line – it rode a little forward then always an oxer-vertical-vertical combo makes it very short and very careful. So I think there the horses had to do a lot for themselves and take care of those rails, so very tricky for sure.” This is Michan’s third victory in a row, twice on the newly engineered footing surface. ” It rides very nice and the horses feel soft in the landing and still have a very good push off the ground. Even for the first weekend, it had great grip and the horses felt secure,” stated Michan. “In the jump-off, I actually lost a shoe and my mare still kept jumping very well for the rest of the course!”

Speaking of horses’ shoes, Heather Caristo-Williams’ mount, Qui Vive Des Songes Z, completed the entire feature class without shoes this past Sunday. “He’s had a lot of problems with quarter cracks in the past, so we took the summer to condition his feet to withstand jumping bigger tracks without shoes,” said Caristo-Williams. “I felt confident enough in the new footing to ride him barefoot and the surface felt incredible this weekend. My horse seemed very comfortable, even when we were speeding around some of those jump-off turns. It had enough bounce and give on the landing side of the jumps and I’m looking forward to competing on it this winter.”

Alberto Michan also rode Zambia Mystic Rose to victory in Friday’s $10,000 Equine Tack & Nutritionals 1.40m Open Stake after completing the jump-off in 44.122 seconds. When asked about the recent wins, Michan commented, “It’s been three great weeks, with three different horses!” This particular pair has not been competing together long: “They gave me this mare a couple of months ago. Nilson [Da Silva] has a big breeding farm in Brazil that produces a lot of top horses, some that recently have been to the Pan American Games, so I’m lucky to have her. She’s a very cool horse.”

Claiming second place was Juan Manuel Bolanos Barrios of El Salvador with his entry, After Eight following a 45.988-second round. Karina Rocha Mello’s Lamina Van’t Gelutt Z was piloted by Joao Eduardo Ferreira De Carvalho of Brazil to a third-place finish once they crossed through the timers in 47.051 seconds.