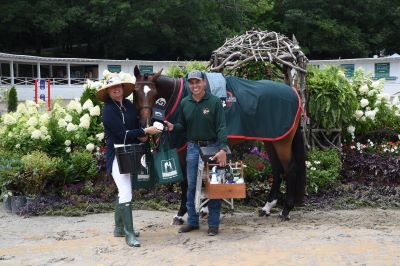 Blowing Rock, N.C. – August 3, 2022 – Jose Aguilar topped a field of 19 entries to win the $2,000 EAF Grooms Class at the Blowing Rock Charity Horse Show on Sunday. His victory with Ann Rice Ervin’s 2015 KWPN gelding Undeniable marks his return to the winner’s circle after previously winning the class in both 2016 and 2018.

Judge Scott Hofstetter had the difficult task of ranking the class’s entries. “It was hands down the hardest class at the show to judge because of the quality of the turnout and the effort that all the grooms put into horses and their setup,” he said.

Amateur hunter rider and EAF board member Missy Luczak-Smith organizes and sponsors the annual EAF Grooms Class at Blowing Rock Charity Horse Show. Now in its tenth year, the class has become a highlight for grooms and owners alike. “I remember our inaugural class in 2013 had 11 entries,” said Luczak-Smith. “In recent years, we’ve doubled that. These grooms hold themselves to such a high standard, and it’s wonderful that the BRCHS community commits to recognizing them each year.”

Luczak-Smith thanked Shapley’s for their continued commitment to both the Equestrian Aid Foundation and the industry’s working professionals. She also expressed thanks to Caroline Moran and Ellen Weaver for their generous support of the class.