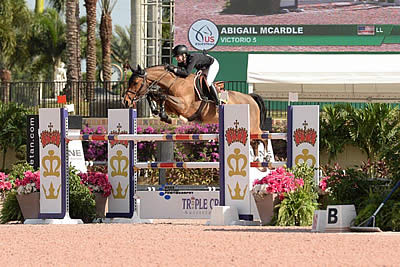 Wellington, FL – December 3, 2018 – Abigail McArdle (Barrington, IL) maintained her lead to take the title after a double-clear performance in the final day of the USEF U25 National Show Jumping Championship at Palm Beach International Equestrian Center (PBIEC), piloting Victorio 5, a 2006 Hanoverian stallion (Uccello x Graefin) owned by Victorio Equine Group LLC, to the top and besting a field of 15. North Salem, NY native Mattias Tromp had one rail down in the first round of Finals competition but countered with a fault-free score of 70.73 seconds in round two with Eyecatcher, a 2009 Dutch Warmblood mare (Harley VDL x Ninewood) owned by Beyaert Farm Inc., to improve his rank by one and claim reserve honors on the week. Samantha Cohen of New York, NY entered round two on just two penalties with her own Carmen, a 2007 Dutch Warmblood mare (Whitesnake x Wanado), and finished the day on a four-fault score of 74.05 seconds to be recognized with third place. The $25,000 USEF U25 National Show Jumping Championship Class 3 welcomed back the top twelve pairs for the second round in order to discern the day’s winners, influencing the weeklong results as well.

The course design by Anthony D’Ambrosio (USA) “asked all the questions,” said McArdle, who has finished on the podium twice prior at the USEF U25 National Show Jumping Championship. “This is actually my third year competing. Every year I’ve had a great horse and it felt like it was just my time. I was ready to win it. I have a lot of belief in this horse right now and I sort of walked into this week knowing I was going to win,” she recalled.

“It’s not at all like a normal show, where you jump a few classes or do your round and then get ready for the grand prix,” McArdle said of the multi-day format. “It asks different questions of your horse. If they’re tired because they’ve jumped a lot of rounds, it’s hard for them to jump that many clean rounds. You also had to go fast – it’s a lot.”

Runner-up Tromp touched on the importance of the U25 division for up-and-coming riders like himself, saying, “I think this division gives the opportunity for younger riders to compete in a championship format that I think will be very important later on in our careers. I think it’s also a great place for us to develop as riders, and also some younger grand prix horses also fit very nicely into this division.

“I think the hardest part is the first day because it’s faults-converted,” Tromp elaborated. “And although the format is done that way so that a good rider can still be in it if they have a rail down, the reality is there are very fast riders involved. I think going into several days of competition it can undo a horse very quickly, so I think as riders we have to be conscious of our horses – yes, we have to ride fast because it’s a faults-converted format, but we can’t undo the horses, either, so that they’re rushing at fences the rest of the week.”

Cohen agreed, “After the first day with Carmen, I had to do a lot of work on the flat before Friday’s class to kind of reel her back in, because I really made her go the first day and she was at the end of stride. I think remaining consistent is definitely a challenge through all of the rounds – it’s really not over until you’ve jumped the last jump.”

But for Cohen, the week’s youngest competitor, the pressure of a national championship was not a hindrance, and might have pushed her to perform at a higher level, she revealed. “Being on Carmen, the pressure doesn’t really get to me as much because I’m so confident on her, and she really never puts a foot wrong in the ring. This summer I’ve gotten to jump a lot of big classes with her and in a couple of pressure situations, and she’s really helped me out. Sometimes pressure helps me ride better, and I just try to block everything out and just focus on myself and my horse. When I’m on a horse like her, the pressure never seems too bad,” she concluded.