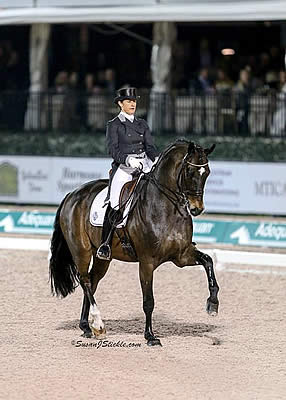 Wellington, FL – February 26, 2016 – Tinne Vilhelmson-Silfven and Don Auriello continue to display incredible consistency at the Adequan® Global Dressage Festival (AGDF) as they made another huge statement in their second appearance this week, earning the win in the “Friday Night Stars” FEI Grand Prix Freestyle CDI-W, presented by The Axel Johnson Group. Competition at AGDF continues tomorrow with the FEI Grand Prix Special CDI-W presented by The Axel Johnson Group beginning at 1:45 p.m.

Vilhelmson-Silfven (SWE) and Don Auriello received a 79.775% for a commanding victory, while Mikala Gundersen (DEN) and My Lady collected second place with a 77.675%. Veteran pair Lars Petersen (DEN) and Mariett finished in third just behind their fellow Danish teammates with a 76.400% for a Scandinavian sweep.

Vilhelmson-Silfven and Don Auriello made the most of their first outing this week, winning the FEI Grand Prix CDI-W, presented by The Axel Johnson Group on Thursday and improved upon their results in front of a large crowd at The Stadium at Palm Beach International Equestrian Center (PBIEC) on a crisp Friday evening.

Don Auriello, a 2002 Hanoverian gelding owned by Lövsta Stuteri, the training and breeding operation of Antonia Ax:son Johnson of The Axel Johnson Group, has a plethora of international competition experience, representing Sweden with Vilhelmson-Silfven at the 2014 World Equestrian Games in Caen, France, and the 2012 Olympic Games in London, England. Only improving with age, Don Auriello and Vilhelmson-Silfven have been nearly unbeatable in Large Tour competition this year at AGDF.

“It was an amazing feeling tonight. When you don’t have any problems in your test, you can just let go and ride. You can go with the flow and I think that’s the feeling today, and I was very, very happy,” commented Vilhelmson-Silfven, who has represented her home nation of Sweden at every Olympic Games since 1992 in Barcelona, Spain.

She continued, “We’re actually changing the routine the whole time and changing the choreography a bit. We’ve been going back and forth for a while. It’s an ever-changing process.

“I think when you ride a freestyle to the music, the highlight becomes when everything works out and you can follow it along the way it should be. I had that nice feeling today, and it was just right. I was happy with him overall, with the feeling he gave me and the balance we had together. I could move forward easily, and the only thing that I would be a little upset with was the first halt. He’s so on that he has no time to stop. Otherwise, it was great.”

“He’s the kind of horse that always gives his best and is always on my side,” she said. “He wants to please me the whole time and go into the arena with all of the people watching. He’s eager to go and that’s an absolutely stunning feeling to have as a rider, when your horse loves to perform.”

Mikala Gundersen and My Lady, owned by Janne Rumbough, are coming off of their major win in the FEI Grand Prix Freestyle CDI 5* just two weeks ago at AGDF and also have found themselves consistently atop the leaderboard so far this season.

“I’m really happy with my test tonight. My goal was to have a similar test that I had two weeks ago, and I feel that I did. I was pleased with Lady, and she was very focused. She felt good throughout,” noted Gundersen. A sound malfunction during the pair’s test was a cause for concern, but the pair rode through the rest of their choreography with ease.

Even though Petersen and Mariett have been performed well this season, Petersen noted that tonight’s class felt like the first time the duo found the rhythm that makes them difficult to beat in the Grand Prix Freestyle class. Mariett, who is now 18 years old, was given off for a number of months after the FEI Reem Acra World Cup Finals in Las Vegas, NV, last April, and it has taken some time for the pair to get back into the swing of things so far this season.

“I’ve had a little bit of a hard time finding that rhythm with her again, so it’s getting better and better. Tonight I was really happy, and I think she was great. I think I could have been a little bit sharper at some points, and I don’t want to blame her because I’m so happy with her,” he said. “She’s 18 and is still fresh and going well.”

Antonia Ax:son Johnson of The Axel Johnson Group explained the organization’s deep ties with AGDF and the influence the winter circuit has had on dressage in European countries.

“This is our sixth season here. Some of us sitting here, as Scandinavians, move here and stay here, while some of us come here and stay for months because it’s absolutely wonderful for our horses. They become so athletic, soft, and supple. I spoke with Tinne just after she arrived here with the horses and she said to me, ‘They’re different’,” said Johnson. “I’ve seen this horse since he came into our barn, and tonight I thought that he just made a beautiful dance for us. It was pure magic tonight, I truly think so.”

The judging panel was very consistent with tonight’s top three competitors and Anne Gribbons, judge at C, was impressed with the quality and presentation of the top three finishers.

“I thought My Lady was just amazing tonight. She was right in front of me when the sound malfunctioned and it was unbelievable how focused she was during the whole test. She knows her whole drill. I thought Mariett also really improved her act from when I saw her a few weeks ago,” she noted. “I think she looked incredibly secure and consistent. Almost back to where you are able to go all out during the tests. Of course, our winner, the softness and presentation is really hard to beat for anyone in the world. You’re very dangerous, Tinne. You are so good as a rider. I feel that all three horses really turned on their best for us tonight.”

This week’s CDI-W competition at AGDF has been one of the most internationally diverse in the facility’s history, with countries from South America, the Caribbean, Europe, Asia, Africa, and Australia, represented alongside North American competitors.

“It has turned into a real international competition here now,” commented Thomas Baur, Director of Sport at AGDF. “It’s the first time that we have more non-North American riders in a CDI (than North Americans), and I think it’s good progress from last year. I want to apologize to Mikala for the music malfunction. We will work on it and we will make sure that it is better for next week and improve.”

A number of special awards were given throughout the evening, specifically in recognition of the owners who continue to serve as the backbone of the sport through their continued support and passion for dressage. Karin Persson, owner and rider of Giuliano, were recognized for their high point score of 79.565% in the AGDF 5 National competition. Melissa Fladland, rider of Mismarck J, accepted the high point score award for the AGDF 6 National show on behalf of owners Rocking Diamond S for the pair’s 78.128%. Anita Fialkow accepted the AGDF 7 FEI Prix St. Georges Owner Award presented by Adequan®, as the owner of Catherina, ridden by Lisa Wilcox, who won the class.

Antonia Ax:son Johnson of Lövsta Stuteri accepted the Owner Award for the FEI Grand Prix Freestyle presented by Adequan®, while Don Auriello’s groom, Angelica Karlson, was awarded the Groom’s Initiative Award by Mark Bellissimo and the Wellington Equestrian Partners for providing diligent and continued care for the winning horse and rider combination.

Michael Klimke (GER) and his own Djamba Djokiba dominated the Small Tour competition once again this season, taking another win in the FEI Intermediaire I, presented by Engel & Völkers, with a 72.763%. Lindsay Kellock (CAN) and Royal Prinz, owned by Teresa Simmons, followed in second with a 70.263% while Virginia Yarur Ready (CHI) and her own Finn placed just behind Kellock with a score of 70.219%.

Competition at AGDF continues Saturday, February 27, with the FEI Grand Prix Special CDI-W, presented by The Axel Johnson Group, beginning at 1:45 p.m. For more information on AGDF and to see a full list of results, please visit www.globaldressagefestival.com.