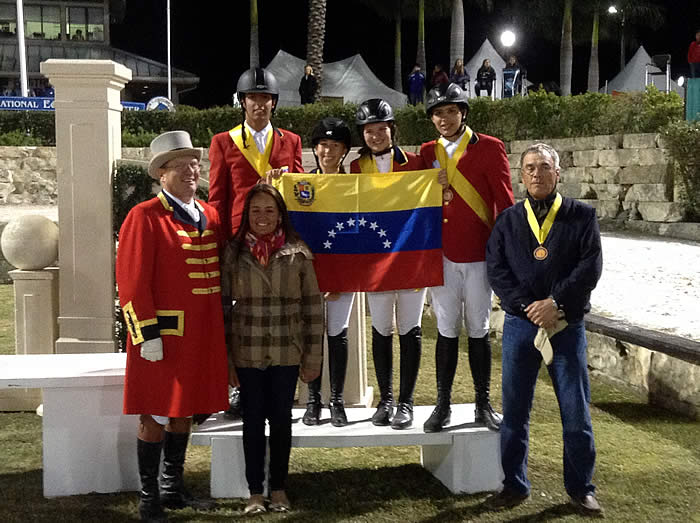 While many of the riders, including teen talents Daniela Stransky, Emanuel Andrade, Jose Fernando Bonetti, Victoria Karam, Gustavo Machado, Maria Gabriela Brugal and Maria Jose De La Torre, along with adult showjumpers Mario Gamboa and Juan Ortiz competing in the Grand Prix, were putting their best efforts for their individual countries, they were also riding as members of “Team Step by Step,” a group of riders of all ages and levels who help raise awareness for the international children’s charity.

The Hollow Creek Farm FEI Nations Cup classes consisted of two rounds for each division shown over courses set by Anthony D’Ambrosio of Red Hook, NY. The first round for each age group was held during the day session in the International Arena and all three second rounds were held at night under the lights. The team from USA won in the young rider’s class and the teams from Brazil won in the junior and children’s classes.

“Our children, junior, young riders and of course our Grand Prix veterans, were amazing,” continued Step by Step founder Liliane Stransky, the owner of Stransky’s Mission Farm.  “I am so proud to have such a wonderful group representing Step by Step!  The kids have all worked so hard to secure a spot on their team, but they are also part of a larger ‘Team’ all year round, one that helps spread the word and raise funds for the non-profit at competitions around the globe!”

Each Team Step by Step member was thrilled to be able to make their nation’s team; they also agreed that Nations Cup competitions offered a wonderful opportunity to draw more attention to the charity and the children who are less fortunate.

“It was such an honor to be able to represent Venezuela and Step by Step at the same time,” stated Daniela Stransky, who piloted her 12 year old WB gelding Twister to double clean rounds to help the Venezuelan Junior Team secure the Bronze Medal.  “This gave us a chance to be on two different teams; one for our own country and the other for a charity that is working to change the world. Either way, we were all winners!”

“This was my first opportunity to show in the International Arena and the first time I jumped the water, which we cleared!” explained Jose F. Bonetti, who rode his bay gelding Umare competing for the DR in the Juniors.  “When you are a part of a team you feel a great deal of responsibility to not only do well for yourself, but for them too!”

The Hollow Creek Farm FEI Junior Nations Cup had six teams make it to the second round of competition with a win for Brazil. The teams of Brazil, Mexico, Venezuela, USA, and Argentina all showed under the lights on Saturday night. “It has wonderful to lead these young riders,” stated Venezuela Chef d’Equipe Leo Godoy.  “Each of the teams showed such promise and I see a bright future for them all!”

All of the riders from every one of the teams were thrilled with the result and agreed that it was a fantastic opportunity to compete.

The Step by Step Foundation works to enhance the lives of underprivileged children by creating and supporting, health, nutrition, water, education and other programs that substantially impact the human rights and development of children worldwide (www.stepbystepfoundation.com).