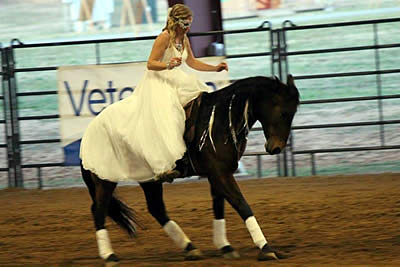 (Doswell, VA) April 1, 2015 – Madison Shambaugh and her mustang “Terk” stopped the show on Saturday evening with their freestyle performance at the Virginia Horse Festival’s Extreme Mustang Makeover Challenge. Shambaugh, dressed in a flowing, white gown and masquerade mask, danced into the ring with Terk to Rihanna’s “Diamonds”, a song that expressed Shambaugh’s feeling that a wild mustang is like a diamond in the rough.

“I think mustangs in general are misunderstood. I hope when people see Terk they realize what is possible when we have the right tools to communicate with mustangs.” Their visually beautiful and technically challenging freestyle, performed with no bridle, earned the evening’s top score, 60 out of 60 points, from both judges. Prominent AQHA judge Mike Jennings told her, “We didn’t have enough points in our score system to give you what you deserve for your freestyle tonight.”

Shambaugh and Terk won the overall Reserve Champion title and Fan Favorite as well as earning the Rookie and Young Guns Award (18-21 years old) in her first time competing at this challenging event.

Bringing Out the Best

Shambaugh arrived at the Extreme Mustang Makeover Challenge in Doswell, Virginia feeling prepared and confident in her and Terk’s relationship and ability to compete, but she knew she’d be up against some really good trainers who had a lot more experience than she did.

Throughout the competition weekend Terk was calm, cool and collected. Shambaugh admits her half of the team needed more work than his. At 21, Shambaugh hadn’t competed in a judged discipline in ten years, and found being scored on movements and patterns much different than her experience in the timed discipline of running barrels. Their team efforts propelled them into the finals where Shambaugh could really showcase Terk’s progress and talents. “It’s about bringing out the best in your horse,” said Shambaugh.

“I’d been visualizing this for so long that I didn’t know if it would live up to my expectations, but it surpassed them,” Shambaugh said. “When we got into our rhythm, everything disappeared around us and it was just me and Terk. I was so incredibly proud of him. The feeling you get from taking a horse that has zero trust in you, to doing whatever you ask of them and giving you their whole heart and soul is the best feeling in the world.”

Shambaugh’s journey to the Extreme Mustang Makeover began when she was a junior in high school, but she didn’t have the opportunity to compete until spring 2014. She signed up for the challenge in New Jersey, but a freak horse accident left her with a broken leg and put her competition hopes on hold. Her second go for the summer challenge in Pennsylvania ended when her mustang developed neurological issues during training and had to be returned. Third time lucky, she partnered with Terk, a 6-year-old bay gelding out of Nevada, who helped her as much as she helped him.

A week before she picked up Terk, Shambaugh’s grandpa passed away. Despite her grief, she immersed herself in the gentling process with Terk and their growing relationship helped her heal. She remembers one of the last things to make her grandpa smile was the nickname her uncle gave her – “Mustang Maddy” – which she had tooled on the chaps she wore throughout the weekend.

Training Terk was not without hiccups and frustration. “I say it’s like relationships with people: slow is fast and fast is slow,” Shambaugh said. It took about 10 to 15 hours of gentling for Terk to get to the point where he trusted her enough for her to halter and lead him. After that, the training process began to move a little more quickly. Their first ride was by the end of the first week, but there were still nights she’d come home wondering how on earth she was going to get him to do a flying lead change. Eventually, the lead changes came – on a straight line with no bridle – along with a bond that would truly touch Shambaugh to the very core.

At the conclusion of each Extreme Mustang Makeover, the horses go up for adoption by auction. From the very beginning, Shambaugh knew she wasn’t going to be able to give up Terk. So when it came time for the auction, the majority of the crowd respectfully held off bidding. One bidder lasted a bit longer than the others, but eventually subsided.

Later that evening, Shambaugh and Terk finally had a moment alone following the freestyle and adoption, where she could shed some silent tears of happiness with her now forever teammate. A woman appeared by the stall, also crying. She said she had been the final bidder and that she had stopped because she didn’t have it in her heart to take him away from her. Shambaugh was deeply touched. From the beginning of the competition it was never about the prize money. She was willing to spend every penny she won to buy him back.

“There’s no greater prize for me than knowing I can go and look at him out the window and know he’s not going anywhere; he’s going to be with me,” she said.

Shambaugh plans to continue with Terk’s training and eventually tour with him doing clinics and raising awareness of what amazing athletes and companions mustangs are. She said she was attracted to the challenge because of everything mustangs represent: something that’s so free and wild and inspiring.

“I think that the Mustang Heritage Foundation does amazing work because they not only raise awareness for mustangs but they inspire and challenge trainers to really push themselves to show the best of their abilities with these animals,” Shambaugh said. “When we learn how to communicate with these animals in a way they understand, the possibilities are limitless.”

Cavalor® is honored to have been a part of Madison and Terk’s journey. She chose to feed him Cavalor® FiberForce because when a mustang comes out of the wild their diet is mostly forage and she believes it is the closest feed to a mustang’s natural diet. The sky is the limit for these two, and Cavalor® is grateful to share the ride.

Cavalor® offers a complete line of horse feed, supplements and care products and has built an international reputation as the world leader in equine nutrition for high-performance horses. Cavalor® has helped thousands of horse owners and competitors understand this very simple but crucially important equation: Proper Nutrition and Care = Top-level Performance and Well-being. Our company’s values are: Innovation – Quality – Results. We dedicate ourselves to inventing, manufacturing and distributing the best quality and most effective equine nutrition products in the world for the health, performance and happiness of all horses, from a foal’s first steps to retirement, and for the treasured backyard horse to the top, elite performer. For more information, visit www.cavalor.com.

Madison Shambaugh is an up and coming young horsewoman from the Midwest who gentles mustangs, starts colts, rehabilitates problem horses, and patterns barrel horses using a natural, no-force method that works off of a horse’s natural motivators and learning patterns. She also offers lessons and clinics in order to share her method, and its success, with others. For more information, visit www.madisonshambaugh.com.

About the Mustang Heritage Foundation:

The mission of the Mustang Heritage Foundation and the goal of the Extreme Mustang Makeover events are to increase the adoption of mustangs across the country. The Mustang Heritage Foundation created the Extreme Mustang Makeover events to showcase the recognized value of mustangs through a national training competition. The nonprofit organization also created the Trainer Incentive Program and youth programs to raise awareness about America’s Mustangs. For more information, visit www.mustangheritagefoundation.org.