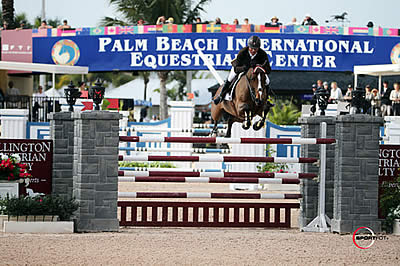 Wellington, FL – January 23, 2014 – Week three of the 2014 FTI Consulting Winter Equestrian Festival (FTI WEF), sponsored by Fidelity Investments, continued on Thursday afternoon with a shared victory for Todd Minikus (USA) and Quality Girl and Tiffany Foster (CAN) and Victor in the $34,000 Ruby et Violette WEF Challenge Cup Round 3. Held in a “California Split” due to the large number of entries, the competition awarded two sets of placings, each with $34,000 distributed.

Brazil’s Guilherme Jorge set the course for the $34,000 Ruby et Violette WEF Challenge Cup Round 3 on Thursday in the International Arena at PBIEC. The class saw a total of 92 entries with 24 clear rounds advancing to the jump-off. Twelve jumped clear over the short course, and Todd Minikus and the Quality Group’s Quality Girl had the fastest time of 40.34 seconds overall for the win in Section A of the class. Tiffany Foster and Artisan Farms LLC and Torrey Pines Stable’s Victor finished in 40.50 seconds for the win in Section B.

The top three finishers in Section A included Minikus and Quality Girl, Ian Millar (CAN) and Dixson, owned by Ariel and Susan Grange, with their time of 40.84 seconds, and Eric Lamaze (CAN) with Artisan Farms LLC’s Zigali P S in 43 seconds flat.

Section B saw a top finish for Foster and Victor, with Kent Farrington (USA) and Amalaya Investments’ Willow in second in 41.80 seconds, and Meredith Michaels-Beerbaum (GER) and Octavia Farms’ Checkmate 4 in third in 43.52 seconds.

“Things kind of just came up nice for me in the turns, and it all worked out,” Minikus said of his jump-off round on Quality Girl. He also had a second chance in the jump-off with Legacy Stables’ Uraguay and did his best to get both top spots, but had an unfortunate stop in the short course.

“I was really trying hard to be second with Uraguay,” he said. “I think I was faster from fence one to two and back to the combination on him and then I kind of got in the same rut that everybody else turned in and he slipped bad going to that vertical. That kind of stunk, but that horse was really on his game too.”

Minikus acknowledged the effort of course designer Guilherme Jorge in Thursday’s class, stating, “I tell you, that’s gotta be a tough job trying to design for that many horses. I guess if you go with percentage of the class, he had 26% clear. That was probably the right percentage. It sounds like a lot, but 24 out of 92, that’s probably a good number. It was a nice course. Some of the younger horses jumped it well, and it was nice that the show management did the California Split. That was the right thing to do with that many entries.”

In addition to the prize money in Thursday’s class, Minikus earned a special $3,000 bonus as part of the SSG ‘Go Clean for the Green’ promotion for wearing his SSG ‘Digital’ Riding Gloves. Each week of the Ruby et Violette WEF Challenge Cup Series, a $3,000 bonus will be awarded to the winning rider if they are wearing SSG ‘Digital’ Riding Gloves in all rounds of competition with the SSG logo clearly visible.

Tiffany Foster was also very happy with her win in Section B of Thursday’s class aboard Victor, her mount of nearly four years. Commenting on the top finish, Foster smiled, “Every win is exciting for me. He felt awesome, and he was perfect. He knows this ring really well, so I know I can take a lot of risks with him here and he is really confident and comfortable. When he is jumping like he was today, I knew I could go really fast.”

“The jump-off was really wide open,” Foster noted. “You had to carry a lot of ground speed and that gets a little hairy sometimes, but not for Victor. He loves that. There was a lot of open galloping, and we are good at that.”

“Because he is so careful, I could go really fast to the plank and really fast to the last jump,” Foster added. “I didn’t slow down at all to those two fences. Most horses, you need to give them a little balancing point so that they can get up and go clear, but I know when he is jumping like that he is never going to knock it down and I can just run as fast as I can. It’s a good feeling; you don’t get that on all of them, that’s for sure.”

Havens Schatt and Bacardi are already off to a good start in 2014. In the seven-year-old KWPN gelding’s first show of his second green year, Bacardi and Schatt were champions of the Equine Tack & Nutritionals Second Year Green Working Hunter at FTI WEF on Thursday afternoon. Schatt piloted Bacardi to four blue ribbon rounds over fences and placed third in the under saddle class.

The reserve champion for the division was As Always, ridden by Jennifer Hannah and owned by Jennifer Smith. The pair were first in the under saddle and fifth, second, fourth, and second over fences.

Schatt and Bacardi had quite the year during 2013 in the First Year Green Working Hunter division. Together they picked up seven division championship titles, culminating with being crowned Grand Green Hunter Champion at the Pennsylvania National Horse Show in Harrisburg, Pennsylvania. Caroline Moran, Bacardi’s owner, was thrilled to see her gelding off to an equally successful start in 2014. Bacardi and Schatt topped their final over fences round on Thursday with an astounding score of 97.

“I didn’t think he could beat himself when he was a First Year horse, but I think he’s jumping the Second Years even better. He is just an amazing horse,” Moran commented.

Bacardi’s steadfast attitude in the show ring is what Moran believes gives him his edge.

“He’s just so consistent. He can be a bit of a brat at home, but whenever he comes to the ring he’s all business and is just a consistently good horse. In my opinion, he’s getting better and better,” she continued.

Moran, an accomplished amateur rider, has gotten in the saddle a few times herself, but is happy to watch Bacardi flourish under a talented rider like Schatt.

“When Havens prepares him to go to the ring, he’s absolutely perfect, so my job is not difficult,” Moran laughed. “He’s just an all-around great horse and of course she rides beautifully. She makes everything look so smooth and every horse look so easy. I think she’s just a classic rider. I think she’s a smart rider. She picks and chooses where she wants to show the horses and only when they’re ready. I think she’s a good horseman.”

Schatt emphasized that slow and steady was the only suitable approach for Bacardi, although she never had any doubt that he would turn into the champion he has become.

“I had in my heart that he could be an amazing horse and I really felt that if you rushed him, you were just going to turn him the wrong way. He was a little bit tricky at first, but it was more just to let him go at his speed than push him to do something he wasn’t really ready for,” Schatt described.

From the start, Bacardi has been a favorite mount for Schatt, who enjoys the unique opportunity she has been afforded to have a mount of her own.

“My job is young horses and making sure they’re ready for their amateurs. He’s really the only horse that I’ve ever had that’s been really just for me. I’ve not really had an owner that let me have a horse and do [what I want],” Schatt explained.

She continued, “I love riding him. That’s why in the very beginning, even though he was a little bit of a pistol, I wanted to have him for myself. He just always seemed to suit my ride. He’s got an amazing rhythm and for a little horse, he has such a big stride. The way his jumping style is, and his front end is so correct, you don’t have to be perfect at every distance. If you’re a little tight or a little long, he’s going to take care of it for you as long as you tell him what you want. That’s always a nice feeling.”

Schatt is equally grateful for her long-standing friendship with Moran. Schatt has ridden horses for Moran for more than 10 years and is comforted knowing Bacardi will always have a loving home.

“She’s such a great person. She loves the horses as much as I do. If he didn’t want to do Second Years for some reason, with what he’s won and what he’s done with her, she would do adult [amateurs] or just play with him. He has a home forever and she’s a great, great person,” Schatt expressed.

Week three of the 2014 FTI Consulting Winter Equestrian Festival will continue on Friday with the $34,000 Spy Coast Farm 1.45m in the International Arena and the presentation of championship honors to the Adult Amateur Hunter 18-35 Section A in the Rost Arena. For full results, please visit www.showgroundslive.com.