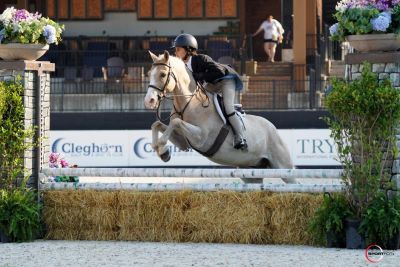 Thirty-six pony riders cantered around the Andres Christiansen course resulting in a handy cutoff score of 76. Somareddy and the 2008 medium Welsh Pony Cross with unknown breeding tackled the classic round with a score of 85, and earned another 85 in the handy round to come out on top. Somareddy said she owes all success to “Monty,” who was “perfect” and “so much fun.” Somareddy enjoyed riding the course, saying, “I kind of was just going around saying, ‘Okay! We’re doing this! First line is done. I love this!’ And before I knew it, it was at the end and we were jumping through the two-stride! And I was just like, ‘Good boy!’”

Somareddy walked in the ring with a mix of jitters and confidence, saying, “I was kind of nervous because I’ve never shown in a big stadium before. But Monty just came in for me and he was amazing. Also, I just want to give my thanks to Schuler Dayner for helping me prep Monty and making him perfect. It was really so much fun! I couldn’t have done it better.”