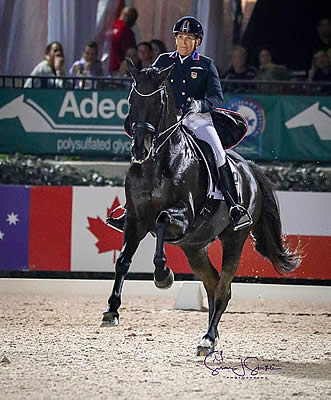 Shelly Francis (USA) and Danilo received the gold medal in the FEI Grand Prix Freestyle CDIO3* presented by Stillpoint Farm. The pair broke eighty-one percent with a score of 81.840%. “I’ve been making personal best the last three or four shows in a row. I’m kind of excited,” said Francis of her season with the 15-year-old Hanoverian gelding by DeNiro x Annabella owned by Patricia Stempel.

Francis’s music especially draws in the crowd at her last centerline. She commented, “I think at that point he’s already ready to make that piaffe and passage up the center line at the end. When the crowd starts clapping and cheering, he starts doing a little more. I just sit there and try to turn real careful in that pirouette, because he’s already so active and going. It feels awesome, and in that last bit of passage he feels on fire with feather-like control. The crowd picks him up a little and they pick me up. He likes this freestyle.”

Tina Irwin (CAN) and Laurencio took the gold medal in the FEI Intermediate I Freestyle CDIO3* presented by Stillpoint Farm. The pair rode to a score of 74.460%. “He felt amazing all week in the warm-up,” said Irwin of her 12-year-old Oldenburg gelding by Laurentio. “We just have to channel a little bit of that energy in the changes. Overall, he’s pretty steady and consistent. I’m thrilled with the week I’ve had with him.”

Laurencio is feeling good and looking for harder work. “Two years ago, I would start with two tempis down the centerline, and I was debating today whether to do that or not. I thought, ‘Ah no, I’m just going to go safe.’ Just before I halted, he threw in a couple of one [tempis] again. Jaimey, my husband, said, ‘I think you’ve got to do those tempis because he’s looking for some work on that centerline.’ I think I’m definitely going to go back to that now. He’s looking for more work, and I think he’s an over-achiever.”

The silver medal went to Jennifer Baumert (USA) and Handsome with a score of 74.300%. “I actually was so happy with yesterday that I tried to keep my warm-up the same,” said Baumert of the 14-year-old Hanoverian gelding by Hochadel. “To keep him sharp and make sure he was feeling good about himself.”

In the FEI Grand Prix Freestyle 16-25 CDIO-U25 presented by Diamante Farms, Lauren Asher (USA) and West Side took their third gold medal of the week. The pair rode to a score of 74.475%. “I don’t think it’s really sunk in,” said Asher of her victory on the 16-year-old KWPN gelding by Florett AS. “It’s a dream come true, and to actually have it become a reality is pretty crazy. It’s a fantastic feeling. I’m really grateful to my whole team behind me.”

Asher spoke to the great opportunity of riding in the U25 division. She said, “I think it’s definitely different in U25 versus Young Riders. It’s definitely on a bigger scale, especially to have the freestyle here tonight under the lights. It’s a fantastic stepping stone.”

Kerrigan Gluch (USA) and Bolero CXLVIII captured the silver medal with a score of 71.700%. “This freestyle was originally not mine. I made some tweaks and made it my own,” said Gluch of her test. “I tried to highlight the horse’s strengths. I think the piaffe-passage is one of the horse’s highlights. I tried to use that to my advantage a bit.

“I think overall the freestyle fits the horse really nicely; I think it has a good energy. I love the final centerline. It’s my favorite part. It has tons of energy, and I think the crowd and the judges enjoy it a little bit more. It’s an awesome feeling finishing on that,” concluded Gluch.