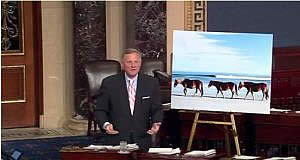 Both Burr and Tillis spoke in support of the amendment on the Senate floor.

WASHINGTON – North Carolina has passed a law to protect the wild horses at the Outer Banks.

“I’m glad the Senate approved this amendment,” he said. “The Corolla Wild Horses have lived on North Carolina’s shores for centuries and are an iconic part of the Outer Banks community. The passage of this amendment preserves an important piece of North Carolina’s heritage and will allow the Corolla horses to delight locals and visitors for years to come.”

Tillis also said he was happy the Senate had voted to pass the protective act.

“I’m pleased that the Senate unanimously approved our amendment to help save North Carolina’s Corolla Wild Horses,” Tillis said. “Many people who have vacationed in North Carolina remember the days when these majestic horses could be sighted on our beautiful beaches, and our amendment will play an important part in ensuring future generations of Americans have their own opportunity to see the Corolla Wild Horses.”

Both Burr and Tillis spoke in support of the amendment on the Senate floor.

Karen McCalpin, Executive Director of the Corolla Wild Horse Fund, said she hopes the act will provide a brighter outlook for the future of the horses.

“I have had to watch the agonizing genetic decline of these historic horses escalate over the last ten years,” she said. “Senators Burr and Tillis have saved one the oldest and rarest strains of Colonial Spanish Mustangs in the world. These horses are beloved by hundreds of thousands of people all across America. We are so grateful to Senator Burr and to Senator Tillis for ensuring that these unique horses will be guaranteed a genetically healthy future for generations to come.”

A copy of the amendment is available to read online at www.burr.senate.gov.

“At least one Wild Horse Herd has won a battle and hopes for continued existence in the United States.” ~ R. T. Fitch