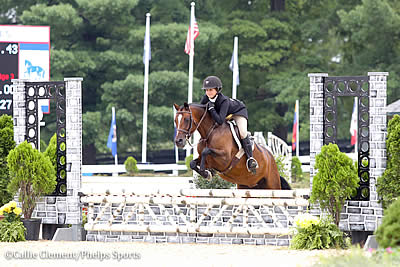 Beginning the day as the early leaders and the last to ride over fences out of 72 entries, Takacs and Kim Wolf’s Galianna needed 236 points to surpass Cecelia Jackson and Northwind Marwyn, the current leading pair, as they entered the ring for their over fences ride. A steady stream of solid performances throughout the class kept the top of the leaderboard close, but luckily Takacs and the dappled dark bay pony had finished the first two phases of competition with a 16-point lead, easing some of the pressure. Pulling in scores of 84, 85 and 87 from the judges’ panel for a total 256 points after a first-rate trip, the 13-year-old rider and Galianna earned the over fences blue ribbon and boosted their cumulative two-day score to 1,040.02, claiming the division title and Grand Green Hunter Pony championship as the highest scoring of the three size-based Green divisions.

Takacs and Galianna, affectionately known as “Adele” or “Deli Sandwich,” are newfound partners, with the young rider only just getting the reins on the mare one short week ago. When California-based Gabrielle Sokolow was not able to attend the 2018 USEF Pony Finals with trainer Corinne Bevins, New Jersey-based Takacs stepped in to take over the ride. Though their time together was scant, the combined talent of the rider and pony proved to be the perfect match, earning top marks in all three phases.

Jackson and Susan McDade’s Northwind Marwyn finished in the reserve position with 1,000.50 points, the only other pair to break the 1,000-point threshold, closely followed by owner-rider Lola Head and Goldhills As You Like It in third position overall. Kierstin Antoniadis and Elizabeth Garcia’s Blank Check finished fourth in the standings, while Alexa Lignelli and The Lignelli Family’s EMC Entourage rounded out the top five placings.

Concluding the afternoon was the Large Green Pony Hunters, comprised of a pack of 81 pony-and-rider combinations vying for the top spot. Riding fifth-to-last in the order of go, 14-year-old Debney and Temple Equestrian, LLC’s Lafayette Park executed a near flawless trip over the 10-fence track to usurp the sitting class leaders, Kierstin Antoniadis and Winter Tietjen’s Pokerface, who leapfrogged from 20th position to the top of the field with a 259-point over fences score. The remaining four contenders each navigated satisfactory rounds, but were unsuccessful at matching the finesse shown by Debney and “Jake,” who ultimately finished in the top spot overall with 1,018.85 points and second in the over fences portion of competition. With their composite score, Debney and Lafayette Park secured the Grand Reserve Green Pony Hunter tricolor.

Debney is hot off a standout performance at the Devon Horse Show with the famous pony, Storyteller, who she piloted to the Large Pony Hunter Championship, the Grand Pony Hunter title, and the Best Child Rider on a Pony title in May. With her win Friday, Debney can add another accolade to her mounting trophy case.

The only other duo to hit 1,000 points, Antoniadis and Pokerface finished in the reserve position with 1,005.03 points, trailed by Isabella Griffin and her own Heaven’s Gift with the bronze. Owner-rider Jessica West and Stoneledge Just My Style captured fourth place, while Takacs added another top placing to her repertoire with fifth position aboard Rendezvous Farm’s Small Romance.

In the Medium Regular Pony Hunters, the last hunter division of the week, Toblerone carried Ava Berman to the forefront of the standings after two strong showings in the model and the hack. Narrowly missing first place by less than half of a point in the model, Berman and Sofia Baiker’s Toblerone secured the divisional lead with a ninth place finish under saddle, propelling them to the top of the overall scorecard with total marks of 519.55.