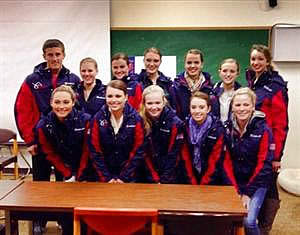 These riders will represent the United States in July 2014 during the International Saddle Seat World Cup competition in Asheville, N.C.

The selection trails were judged by a four judge panel of Donna Pettry-Smith, Gary Garone, Richard Wright, and Cindy Mugnier. Riders were given only seven minutes to warm up before each rail phase and rode horses provided by William Woods University. Additional horses were provided by Stephens College, Glendale Stables, and Fairview Farm. The horses were any breed or crossbreed suited for and trained in the Saddle Seat discipline.

The Saddle Seat World Cup is a bi-annual international competition originating in the early 1980s as an informal exchange of Saddle Seat riders between the United States and South Africa. Teams from as many as five nations now compete for the coveted World Cup titles.

The USA Equestrian Trust and the United Professional Horsemen’s Association have provided grant support for 2014. 6D Ranch provided support for the Trials. Contribution opportunities are still available for the U.S. Saddle Seat World Cup. If you are interested in supporting the team’s efforts, go to https://www.usef.org/documents/SaddleSeat_WorldCup_Donation_Brochure.pdf.

For additional information or questions regarding the Saddle Seat World Cup, please contact Lori Nelson, USEF Assistant Executive Director, National Affiliates, by phone at (859) 225-6957 or via email at lnelson@usef.org.