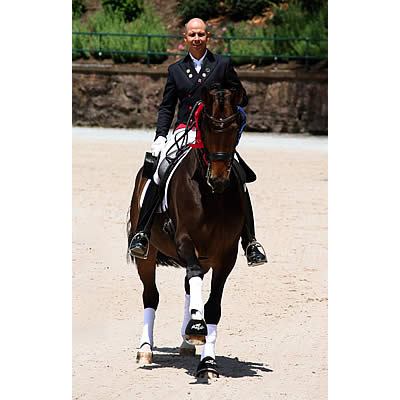 Aiken, SC (May 12, 2015) – Custom Saddlery is proud to announce that three of the outstanding riders the company sponsors have been named to the 2015 Dressage Pan American Games European CDI Observation Event Squad. Steffen Peters, Kathleen Raine, and Sabine Schut-Kery were chosen to compete for the chance to represent Team USA in the 2015 Pan American Games to be held from July 10-26 in Toronto, Canada. “We’re just so blessed here at Custom Saddlery to have some of the world’s best riders,” says Custom Saddlery’s saddlefitter Sarah Boothe, expressing the sentiment of the company, which is the Official Saddle of the United States Dressage Team through the 2016 Olympics.

Olympian Steffen Peters recently earned a third place ranking in the Grand Prix at the 2015 Reem Acra FEI World Cup Dressage Finals in Las Vegas, riding in his Custom saddle. To achieve this placing, Peters and his mount Legolas 92 scored an incredible 76.832 percent. The year so far has been flowing in Peters’ favor, as he can already boast wins in Wellington, Florida and San Juan Capistrano, California, amongst others. Peters has been riding in Custom Saddles for a large portion of his riding career, and will once again rely on the brand during his performances in the 2015 Dressage Pan American Games European CDI Observation Event Squad. “We’re thrilled to have worked with Steffen for over a decade now,” says Boothe. Peters has been named not once but twice to the 2015 Dressage Pan American Games European CDI Observation Event Squad – the Californian will compete in the Big Tour on both Legolas 92, a 2002 Westphalian gelding, and Rosamunde, a 2007 Rheinlander mare. Both horses are owned by Four Winds Farm.

Kathleen Raine, also hailing from California, is an influential figure in the dressage community, constantly proving herself a talented and experienced competitor in the sport. She started off 2015 strong, competing at the Adequan Global Dressage Festival in Wellington, Florida. Raine and Breanna – a 2001 Hanoverian mare owned by Raine, Jennifer Mason, and David Wightman – received high placings in the Grand Prix and also took home first place in the Grand Prix Special in the CDI5* competition. Raine is an accomplished trainer, co-owning Adventure Farm training facility with her husband David Wightman. Raine and Breanna have been named to the 2015 Dressage Pan American Games European CDI Observation Event Squad to compete in the Big Tour.

Sabine Schut-Kery and Alice Womble’s Sanceo, a 2006 Hanoverian stallion Sanceo, have been named to the 2015 Dressage Pan American Games European CDI Observation Event Squad to compete in the Small Tour. The duo has been a pair to watch this year, already winning multiple competitions at FEI Prix St. George and Intermediate levels. Schut-Kery has been riding Sanceo since he was three years old, and their familiarity with one another shows as they continue to deliver solid performances in the ring. Schut-Kery was a part of the USDF Amateur Program in 2014, traveling around her home state of California giving amateur clinics. “She really gives back a lot of her time to the dressage community,” explains Boothe of Schut-Kery’s dedication to the sport.

Custom Saddlery strives to make saddles that provide both riders and their horses with comfort and the ability to perform to their full potentials. Anyone who has tried out a Custom saddle knows that the perfect saddle can make a great difference in the show ring. “People just have to sit in a Custom saddle one time,” Boothe comments. “Once they sit in the saddle, it changes their position and the way the horse goes. I’ve seen horses that are very short-strided fitted with a Custom saddle that opens their shoulders and gives them the freedom to move correctly. I’ve watched countless horses evolve just by changing the saddle.” Custom Saddlery is excited to watch Peters, Raine, and Schut-Kery compete in the 2015 Dressage Pan American Games European CDI Observation Event Squad, and is proud to supply them with saddles that can help propel them toward the 2015 Pan American Games.

To learn more about Custom Saddlery and discover a saddle designed just for you and your horse, visit www.mysaddle.com or call 1-800-235-3865.