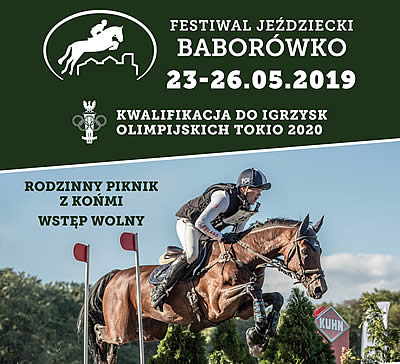 Baborówko Equestrian Festival 2019 starts next Thursday, the 23rd of May. Five international eventing classes, including the CCIO4*-L class, a qualifier for the 2020 Olympic Games in Tokyo.

The best team of the CCIO4*-L class, the hardest one at the event, will get a chance to compete at the Olympics. The cross-country trial for the class will be 5.700 metres long, with 40 obstacles to clear in about 10 minutes.

Three teams from the C group (Central and Eastern Europe and Central Asia) will compete for the qualification for Tokyo, including the polish national team. The members are not known yet, but the team trainer, Marcin Konarski, takes six pairs into consideration: Jan Kamiński with Jard, Mateusz Kiempa with Grand Supreme, Mariusz Kleniuk with Winona, Joanna Pawlak with Fantastic Frieda, Paweł Spisak with Banderas, and Paweł Warszawski with Aristo A-Z. Polish athletes will compete against teams from Russia and Belarus.

Each country competing for the Olympic qualification can enter a team of four horse and rider pairs into the class. The results of three best pairs will count for the final ranking, after three trials of dressage, cross-country, and showjumping.

The organisers invite everyone to actively support the Polish national team on Sunday, the 25th of May, by wearing white and red clothes and bringing Polish flags.

Once again, the event in Baborówko attracts top riders from around the world. The audiences will have an opportunity to see, among others, Tim Price (NZL), the current number 2 in the International Equestrian Federation rankings; Michael Jung (GER), the biggest star of international eventing, having won all titles possible in the discipline; and Andreas Dibowski (GER), the gold medalist of the 2008 Olympic Games in Tokyo.

The athletes will compete for the record-breaking prize pool (even bigger than last year’s record). Thanks to the support of the Patron of the event, Mr Roman Roszkiewicz, the collective prize pool in the international classes will reach 465 000 PLN. The CCIO4*-L the prize money will be as high as 85 000 PLN, 60 000 PLN of which will go to the three best teams in the class. The biggest prize is to be won in the CCI4*-S class, 100 000 PLN, with the collective prize pool in the class being 325 000 PLN.

Baborówko offers much more than the sporting spectacle. The organisers invite not only equestrian fanatics, but also families, children, and seniors. A special competition, a relay race with a horse carriage and a car, a stunt show by La Pattat group, as well as agility and frisbee dog shows are all part of the additional programme of Baborówko Equestrian Festival. The shows will start at 12:00 on Sunday, the 26th of May, at the main hippodrome.

All kids are invited to the fun zone, with attractions prepared by the Szamotuły Cultural Centre, the Fire Department and Nadleśnictwo Pniewy. The organisers also encourage everyone to visit the regional products fair and equestrian equipment stands.

5 international classes: the CCIO4*-L (the Olympic qualifier), CCI4*-S, CCI3*-S, CCI2*-S, CCIYH2*-S, and one national L class will be played out at Baborówko Equestrian Festival. Dressage trials for the international classes will take place on Thursday and Friday. Saturday is cross-country day, and on Sunday, it is time for the showjumping trials and prizegiving ceremonies.

More information can be found at www.festiwal.baborowko.pl.