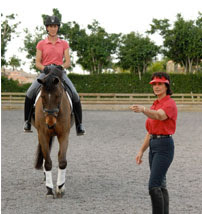 All those things make you feel good right? I used to think so. I used to compliment all the other horses in the barn, thinking I would be helping their self-esteem by reminding them how great they are. But new studies indicate that this may not be the case.

An article by Po Bronson, posted in New York Magazine, states that certain types of praise can have a negative effect on the behavior of people. (For the entire article, go here: http://nymag.com/news/features/27840/.)

A study was done that indicated that if children are constantly told they are “smart” or “talented” or “the best,” it can create a situation in their minds that makes them “risk averse.” They become so sensitive to any task that isn’t immediately easy, that they stop trying. They won’t take risks that might prove to their parents or teachers that they don’t have the natural talent or brains with which they’ve been labeled. In equestrian terms, it takes away their “try.”

So, what should you do instead? Acknowledgement is important and you still want to acknowledge success and effort. However, you can change the way you “praise” by simply stating (with a positive tone in your voice) what action was actually completed, without the qualitative words like “good,” “best,” “smart,” or “talented.”

What’s the difference? Instead of saying something like “You’re really good at lead changes,” you simply state with a happy voice, “You did three lead changes!” It may sound like the same thing, but it’s NOT! To say “good lead changes” makes the statement qualitative and about YOU, the observer, and what the observer has just observed… indicating that the action has now been judged as “good.” But to say “you did three lead changes” acknowledges a FACT about what the person (or horse) factually DID. It’s only about the person who just completed the task. There is no judgement, no opinion, just the facts about what was done. And such a statement will automatically cause the subject to look back at his or herself, and say inside with pride, “Yes! I did three lead changes!” It feels so good to acknowledge the self without first seeing it through the observer’s point of view, that the behavior will most likely be repeated!

This subtle difference is very powerful. And it’s a bit confusing at first. Practice acknowledging your students, children (if you have them), and friends (both two and four legged), and see if you can just state the FACTS in a happy, appreciative voice. Then watch how they react. You may be able to see their attention switching to their inner self with a smile and a straightening of their posture. It’s very interesting to observe.

It is important that you acknowledge yourself this way, too. Rather than saying “I rode well today,” say “I rode my horse today, and we ran through First Level, test two, four times.” Or, “I went to the barn and brushed my horse today.” State what you DID, without a qualifying or judgment word. Notice how acknowledging the FACTS about what you did, changes how you feel inside.

I completed eleven one tempis in a row today! I practiced pirouettes for ten minutes today. I slept in the sun for two hours this afternoon. I dictated this message to you today. Acknowledging these facts gives me a great sense of accomplishment!

What have YOU done today? Just the facts, ma’am. Just the FACTS….