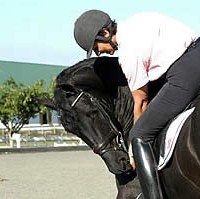 I often hear Jane talking to people in sounds that I don’t understand. I may not be clear on the distinctions of her human words, but I can hear and feel the meaning behind them.

She has suggested that people eliminate the word “not” from their vocabulary because there’s no picture in the mind for the word “not”. None of us can picture “not”! Since I process the world in mental pictures, the word “not” creates mind pictures that are just the opposite of what the person really wants.

Saying “Don’t shy” tells me there’s danger ahead, and I SHOULD shy to keep us safe.

Jane speaks to me in positive words, whose meaning creates the picture in her mind and my mind of what she DOES want. That I can understand!

How do you speak to your horse, and to yourself? Train yourself to always speak and think in what you DO want, not in words describing what you don’t want.

Jane doesn’t want me chewing up her shoes. At first I was confused, because I kept hearing her say “chewed shoes” and thought that was what she wanted! I could not understand why she seemed unhappy when I was just doing what matched her mind pictures! So… I chewed up more of her shoes, and then started in on Rhett’s shoes, since her mind seemed to be asking me to do just that. 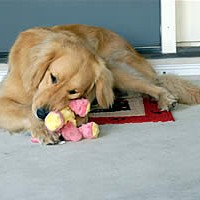 I got it! Chew stick, happy. New shoes, happy.

Let’s go to the barn and see Moshi! And then throw the stick!