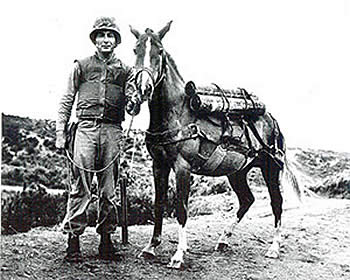 WESTPORT, CT – May 20, 2014 – In keeping with the spirit of Memorial Day, as it pays tribute to United States men and women who have died serving their country in the military and expresses gratitude to all servicemen and women, two military horses, Staff Sergeant Reckless (1949-1968) and Klinger (2000- ), are likewise garnering accolades. Both noted for exemplary service in the United States armed forces, they have been honored by the horse world as members of the Horse Stars Hall of Fame, a joint program of the EQUUS Foundation and the United States Equestrian Federation (USEF).

Reckless, a Korean pony who stood 11 hands one inch, and Klinger, a Morgan-Percheron cross that towers above all his human associates at a height of 17 hands, are a contrast not only of size, but of time and place, their years of military service separated by more than half a century and thousands of miles.

Both horses have inspired writers to tell their stories. In 2004, Betsy Beard, devastated when her son, Army Specialist Bradley Beard, was killed in action in Iraq, came to TAPS and began channeling her grief into writing, subsequently becoming the editor of TAPS Magazine. She later researched the TAPS mascot and wrote a fictional children’s book, Klinger, a Story of Honor and Hope, for the organization. Published in 2010, the book is given to children in the TAPS program, along with a stuffed horse modeled after Klinger.

Now Janet Barrett’s new book, They Called Her Reckless — A True Story of War, Love and One Extraordinary Horse, is making Marines proud and winning a host of new fans for this real-life warhorse. The first full-length biography of the amazing Staff Sergeant Reckless, it tells of the powerful bond between her and her fellow Marines and what it achieved.

Beginning in October 1952, Reckless was a valued presence to the members of the Marine Fifth Regiment fighting the Korean War, who acquired the Jeju pony to haul ammunition to the front lines. Specifically charged with transporting the heavy shells to the 75mm recoilless rifles, she did that and so much more: packing ammo beyond what anyone thought possible, saving lives, raising spirits, and winning the love and respect of all who knew her.

Quickly becoming the revered warhorse of the regiment, the courageous Reckless, the Marines were fond of saying, was the only horse that came out of the war with fame and a name. Given the rank of private first class soon after she came to the Marines, she rose through the ranks, finally promoted to staff sergeant before being retired in 1960 at Camp Pendleton, CA. A statue of her was dedicated at the National Museum of the Marine Corps, in Virginia in 2013, and this past March she joined Klinger as only the second military member of the Horse Stars Hall of Fame. Read More…

At age 13, Klinger, the oft-described gentle giant, is still a working member of the U.S. Army’s Third Infantry Regiment (The Old Guard) Caisson Platoon. In ten years of service, his various ceremonial duties have included being part of the team that pulled the caisson in more than 5,000 full-honor military funerals at Arlington National Cemetery.

The kind, steady Klinger also provides another type of comfort, helping young children to cope with the death of a loved one in the armed forces. As the unofficial mascot of the Tragedy Assistance Program for Survivors (TAPS), a national nonprofit veterans service organization, Klinger is often on hand for TAPS events, where his gentleness is evident as he obligingly lowers his head for even the littlest child to pet his muzzle.

This past year, the Washington International Horse Show (WIHS) recognized Klinger for his induction into the Horse Stars Hall of Fame with a special ceremony at center ring on Military Night. WIHS also honored Klinger with a special award to be presented annually at WIHS in his name. The Klinger Perpetual Award for Honor and Service presented by Ariat International and EQUUS Foundation will recognize a horse, individual or organization each year that best demonstrates the values of honor and service as embodied by Klinger. Read More…

Inducted into the Horse Stars Hall of Fame as humanitarian horses, the category overseen by the EQUUS Foundation, Klinger and Reckless show the diversity of what horses can accomplish. Though the role of a warhorse has virtually disappeared from combat, the work Klinger does with the Army and TAPS goes on. While the public generally knows more about sport horses, and many of the finest are selected by USEF for membership in the Hall of Fame, the EQUUS Foundation focuses on promoting the other avenues open to horses.

“They are incredible animals,” says Lynn Coakley, the foundation’s president, “and we want people to understand just how much value they have beyond the role of sport horse, exciting as that can be.” In fact, she adds, “Many horses can go on to other careers after they leave the riding ring,” noting the growing field of therapeutic riding. Through its Equine Welfare Network, the EQUUS Foundation works with over 800 equine organizations, among them therapeutic riding centers and rescue organizations, providing financial support, or working with volunteers and staff to improve the delivery of services.

Partnering with USEF to create the Horse Stars Hall of Fame, Coakley believes, is a simple and direct way to let people know the scope of what horses can do.

Visit the Horse Stars Hall of Fame HERE to learn more about all the inductees.

About EQUUS Foundation: The EQUUS Foundation, a 501(c)(3) public charity established in 2002, also known as Horse Charities of America, is dedicated to improving the quality of life of horses, enabling the therapeutic use of horses for those in need, fostering the horse-human bond, and educating the public about the horse’s unique ability to empower, teach and heal. Donations are tax-deductible to the full extent of the law. Contact the EQUUS Foundation, Inc., at 168 Long Lots Road, Westport, CT 06880, Tele: (203) 259-1550, E-Mail: equus@equusfoundation.org, Website: www.equusfoundation.org.

About USEF: Established in 1917, the United States Equestrian Federation (USEF), www.usef.org, is dedicated to uniting the equestrian community, honoring achievement, and serving as guardians of equestrian sport. The USEF promotes the safety and welfare of horses and riders while encouraging interest, participation and excellence at every competitive level and for all breed and discipline affiliates within the Federation family equally. The USEF is the only national organization dedicated to the promotion of the equestrian sport, fair competition and equine welfare regardless of breed or discipline.