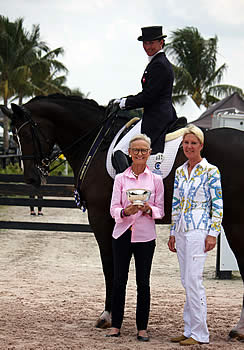 Wellington, FL (April 7, 2015) — During the final week of competition at the 2015 Adequan Global Dressage Festival, Mikala Gundersen and My Lady (Michellino x Marion) capped off an incredibly consistent season with another two Grand Prix wins. The pair scored 73.380 percent in the FEI Grand Prix and 76.450 percent in the FEI Freestyle Grand Prix. Gundersen and My Lady, who were teamed up just four years ago, completed the winter Wellington season as the top money earning pair and the second-winningest pair on the 2015 circuit (after their Danish teammates Lars Petersen and Mariett). To honor the great sportsmanship, horsemanship, and performance that brought Gundersen to such overwhelming success with My Lady, Wellington-area realtor Ann-Louise Cook presented her with the People’s Choice Award.

Gundersen and My Lady met in 2011, when the bay Danish Warmblood mare was already eleven years old. “We had to develop a partnership — with an older horse, it takes a little while before you get to know each other. She was a tough lady when she came to us — she was very opinionated,” remembers Gundersen. She and the horse’s owner, Janne Rumbough, had already agreed against high expectations for success in the show ring. Said Rumbough, “Mikala and I decided when I bought the mare that we were going to do it for fun and we were going to make it beautiful, and we never thought of anything else but that.”

Then, in the midst of all that positive energy, everything began to fall into place. “She just softened in our hands,” said Gundersen. “We’ve got the most amazing relationship. We travel the world together and I fly with her; basically I live with her all of the time. I can see her from my kitchen window at home so we are very close and very connected, and I think that’s very important at this level of the sport.”

“Mikala and My Lady just evolved to become the perfect combination. The deal when we bought her was that we were going to share the ride — and then they kept winning, and winning, and it all worked out exactly the perfect way because there’s no way I can ride two Grand Prix horses!” laughed Rumbough, who competes her P.R.E gelding Junior at the Grand Prix level.

“Mikala is just such a wonderful ambassador for the sport,” she added as Ann-Louise Cook presented Gundersen with the final People’s Choice Award of this season. “I’m very proud of her getting Ann’s award. It’s a wonderful thing to recognize and we’re very grateful, Ann, that you do something so nice like that.”

Ann-Louise Cook, a dressage rider and successful realtor at Illustrated Properties specializing in equestrian and luxury properties, established the People’s Choice Award as a way to give back to her equestrian community. The award honors riders who are well-known for exhibiting good sportsmanship, horsemanship, and performance in the Wellington dressage show circuit this season.

Gundersen, whose upbeat attitude and good sportsmanship have made her very popular at the Adequan Global Dressage Festival show grounds, expressed appreciation for the sense of camaraderie she feels in the show circuit. “We meet each other all of the time, and we are so close — the owners, riders, grooms — we hang out together. We enjoy each other. When we go into the ring we are competitive, but as soon as we are out of the ring, we are a big group of very good friends. I enjoy that very much. It’s also a big responsibility when you are riding at this level that you show the younger people how to treat the horses, how to ride the horses well, how to make them soft and happy, and how to treat other people with respect.”

As the final week of the Wellington season drew to a close, Gundersen and My Lady received an invitation to compete — for the second year in a row — in the 2015 Reem Acra FEI World Cup Dressage and the Longines FEI World Cup Jumping Finals in Las Vegas, which runs from April 15-19.

A dressage enthusiast herself, Ann-Louise Cook is happy to sponsor the show series and to recognize deserving riders with the People’s Choice Award. Cook exemplifies excellence in her own work with Illustrated Properties Real Estate Inc., devoting herself to educating her clients and ensuring they have the best real estate experience in buying or selling Wellington area properties and farms.