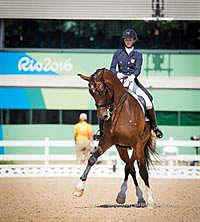 Rio de Janeiro, Brazil – Excitement filled the air as the final day of dressage got underway at the Rio 2016 Olympic Games at the Deodoro Olympic Equestrian Center on Monday. The top 18 competitors from eight nations competed in the Grand Prix Freestyle, the deciding competition for the Individual medals. Only three athletes from each nation were eligible to compete. After winning the Bronze medal with teammate Kasey Perry-Glass on Friday, Steffen Peters, Alison Brock, and Laura Graves entered the sun-filled stadium to perform the Freestyle set to personally-chosen music. All three had fantastic performances, with Graves coming in again as the highest-placed U.S. rider and finishing just outside the medals in fourth place.

The pressure was on for Graves (Geneva, Fla.) and her own Verdades, a 14-year-old KWPN gelding. The combination was competing in its first Olympic Games, and turned in personal bests in the Grand Prix and Grand Prix Special, leading the U.S. to the Team Bronze medal. The pair was the penultimate combination to go in the Freestyle and produced a breath-taking performance to earn 85.196%, which put them in third place with Germany’s Isabell Werth left to go. Although Werth’s ride on Weihegold Old dropped Graves to fourth, it was a fabulous finish.

The pair executed many high-risk movements throughout the test, including two-tempi canter flying changes on a half-circle leading into one-tempi changes, which earned multiple 9s from the jury, as did their double canter pirouettes, harmony, degree of difficulty, and music.

“I’m thrilled with the score,” said a beaming Graves, who earned three personal-best scores while competing in Rio. “Because Verdades is really honest, the degree of difficulty is something that I can play with and so you have to highlight those moments. We did them twice, showing that it’s not just luck, and the judges obviously rewarded us for it today.”

In regards to how Verdades felt in the arena, Graves commented, “I don’t feel like I had quite as much horse as I’ve had over the past couple days. It’s very hot and we’ve been here just over two weeks, so it’s been a long time for us to keep our horses going like this, but he was ready. He stayed really honest, and I couldn’t have asked for more.”

“I’m just so happy,” continued Graves. “I believe in a system, following a routine, and finding a trainer you trust and staying with them. I’m so blessed that both Robert [Dover] and my personal trainer, Debbie McDonald, have sacrificed so much of their time this summer to be over in Europe with the Team and it really has made a difference.”

Peters (San Diego, Calif.), competing in his fourth Olympic Games, and Legolas 92, a 14-year-old Westphalian gelding owned by Four Winds Farm, were the first combination into the arena Monday morning. The pair set the bar high from the start. Opening with the well-known song “Under Pressure”, the pair’s well-executed and harmonious test captured the audience and seven judges’ attention. The jury gave the pair several 9s for their music, choreography, and degree of difficulty, and Peters earned a final score a 79.393% for a 12th-place finish.

“I’m super happy, and it’s super exciting!” said Peters with a grin from ear-to-ear. “I added a few extra degrees of difficulty to the test today. The double pirouette before the canter-piaffe transition is a new one, and I hadn’t done the piaffe-pirouette on center line in a while. I knew if I’d be slightly ahead of the music I would do a double pirouette after the extended canter. Since he did all the other piaffes very well, I thought we’d take a risk and see if he turns with the music and especially in the piaffe-pirouette to the left. He was dead-on with the music, and even there I already had a big smile on my face, and today was 99% less pressure than the previous days, so honestly I had a blast in there – I just loved it.”

“I hadn’t been first into the ring for years, so it was my time!” added Peters with a laugh. “I was hoping for a score of around 80% and the judges agreed with me, so I’m super happy! Legolas just had a fantastic three days at the Olympic Games. I wish I could put into words how much winning the [Team] Bronze medal means to me and also how much it means to me how well Legolas did here.”

Third into the arena was Brock (Loxahatchee, Fla.) and the 14-year-old Hanoverian stallion Rosevelt, owned by Claudine and Fritz Kundrun. They performed a lovely Freestyle to score 76.160% for 15th place in their first Olympic Games.

“I’m really happy with my test and Rosevelt was very good, bless his heart,” said Brock. “I just love that music – I think it really suits him very well. It’s a really beautiful compilation of music from a group called Tanghetto. The canter music is from ‘Mr. and Mrs. Smith’. It’s the type of music that doesn’t overwhelm the audience and it draws you into the horse. I’m really happy.”

Graves summed up all the U.S. riders’ feelings at the end, saying, “This has been an incredible experience to be here with this Team, and we have such a huge family of supporters who came this far just to be with us all. We sometimes forget that it’s more than just us and the horse. We have so many people around us who make this happen and to watch what they sacrifice for our dreams is something that is very emotional for everyone.”

Defending Olympic Champions Charlotte Dujardin of Great Britain and her mount Valegro, a 14-year-old KWPN gelding, who are also World and European Champions, claimed their second consecutive Olympic Individual Gold medal, topping the field with an impressive score of 93.857%. Germany’s Isabell Werth and the 11-year-old Oldenburg mare Weihegold Old, claimed the Individual Silver with a score of 89.071%, making Werth the most decorated Olympic equestrian of all time with a record 10 Olympic medals (six Gold and four Silver). Teammate Kristina Broring-Sprehe and the 15-year-old Hanoverian stallion Desperados FRH took the Individual Bronze medal with a score of 87.142%.

Show jumping returns to action on Tuesday with the first half of the two-round team competition, beginning at 9:00 a.m. ET. Watch live on NBCOlympics.com.