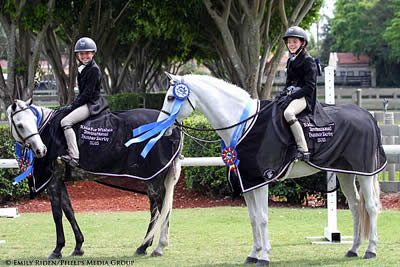 Wellington, FL – April 1, 2015 – Every year during the Winter Equestrian Festival (WEF), Debbie Dolan-Sweeney and husband Brian Sweeney host a birthday party for their triplets, Helen, Corinne and Sean. This season, they decided to try something a bit different.

The Sweeneys swapped bouncy castles for hunter jumps, birthday cake for carrots and apples, and gifts for the triplets for one $8,500 gift for Make-A-Wish®, all as part of the inaugural Kids for Wishes Invitational Hunter Derby.

“[The Winter Equestrian Festival] had the derby for the horses and for the division ponies,” said trainer Linda Smith Faver of Happy Endings Farm. “A group of my kids wanted to do it, but they didn’t have ponies that were capable. So instead of the birthday party, Debbie decided to host a derby geared toward the younger kids.”

Faver continued, “Debbie also thought that by having a charity component, it was a great way to teach the kids to give back. The kids wanted to do something for other kids.”

That’s where Make-A-Wish and The Derby at the Genesee Country Village & Museum (GCV&M) came into play. The 2015 Derby at GCV&M will also feature a pony hunter derby, and at least $7,500 in proceeds from the two-day horse show will go directly to Make-A-Wish Western New York as the show’s charity beneficiary. Connecting the two hunter derby events in support of the same charity just made sense for The Derby manager Brian Brown.

“Brian has a relationship with Make-A-Wish in Buffalo, so he helped get us in contact with them to ask if we could do it,” Faver explained. And with the green light from Make-A-Wish® South Florida, the Kids for Wishes Invitational Hunter Derby was born.

In just a few short weeks, Dolan-Sweeney, Faver, Brown and countless other volunteers and supporters came together to organize the event that featured a Children’s Pony division, with a section for large ponies and another for small and medium ponies, and a Short Stirrup Derby for the youngest competitors.

“Brian Brown was the manager, and he really stepped up and organized it for us,” Faver said. “I think a lot of credit goes to Brian and his friends because I could have never done it without them. He’s really great. He took a day off from work, and David Burton allowed us to use some of their jumps. Everyone here was behind us.”

Thanks to the large group of supporters behind the event, the Kids for Wishes Invitational Pony Hunter Derby was able to raise $8,500 for Make-A-Wish®, an impressive amount that represents the average cost of fulfilling a wish for a child diagnosed with a life-threatening medical condition.

Judges for the day included Holly Bossert, Rachel Kennedy and George Wallace, and Lewis Pack served as the announcer and course designer, along with Brown.

Sponsors and supporters of the Kids for Wishes Invitational Pony Hunter Derby included The Paisley Magazine, the generous donors of the beautiful coolers for the winners; Kate Stoffel Oliver, who donated all of the ribbons and numbers for the young riders; Rich Faver at Ossian Ventures Equine Quarantine, who sponsored the expansive hospitality tent; Margaret Walsh; Karen Walcott; Open Minds Academy, who provided snacks and drinks for all of the participants; Sagamore Farms; Courtney O’Brien; Shannon Ziskind; Maddie Onorato; Ashley Palumbo; Rachel Kennedy; Holly and George Wallace; Ann K. Hubbard Tack Shop, who donated special, custom Kids for Wishes key chains; and many, many more.

To find out more about The Derby at GCV&M and the event’s $5,000 Pony Hunter Derby, visit http://www.tsgequineevents.com/.

The Derby at the Genesee Country Village & Museum Fast Facts

Sponsorship Opportunities:
Supporting The Derby is the perfect way to enjoy a fabulous day with friends, clients or colleagues, all while helping others and gaining valuable marketing and exposure!