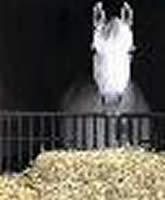 As many hay producers make their first cutting, they are finding lower-than-normal yields. The lower yields are due to a variety of reasons and depend on the type of hay produced and the producer’s location, said Ray Smith, PhD, professor and forage extension specialist with the University of Kentucky College of Agriculture.

An unseasonably mild winter and a warm March allowed the hay crop to mature quicker than normal. But many areas in Western Kentucky have had very little rain this spring, which could be one explanation for lower yields of grass hay. Yields are also down in areas of Eastern Kentucky that have received more rainfall. Smith said the lower yields in this area could be caused by producers not applying fertilizer because of the high cost of nitrogen. Another explanation might be that significant temperature swings this spring affected the grasses’ growth patterns.

Alfalfa producers and those with grass-clover mixed hayfields are seeing higher yields than those with just grass hay.

“Across the state, the mild winter and good early precipitation led to tremendous early growth of clover this year, and alfalfa yields are good despite some alfalfa weevil damage,” Smith said.

Smith encouraged those who haven’t made their first cutting of hay this year to do so soon. It is very likely that grass hay producers will get a quality second cutting this year if they receive timely rains.

Smith said it is likely alfalfa producers, who will take their second cutting in a few more weeks, will get a good second cutting, regardless the amount of rainfall their area receives between now and then. This is because alfalfa has a deep root system and can thrive even in dry areas, he said.