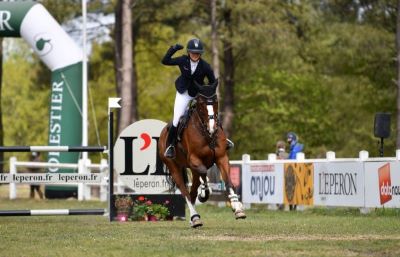 Simply the best! From beginning to end! Leader at the end of the dressage, leader at the end of the cross country, the German Julia Krajewski, riding Amande de B’neville, did not crack under the pressure and puts her signature on a perfect show jumping round, synonymous with victory in this CCI 4 * -L Equi Action of the Saumur Complet. Also consistent throughout this Saumur competition, the French Thomas Carlile on Birmane finished second. The Olympic runner-up, the Frenchman Nicolas Astier, in the saddle of Babylon de Gamma, benefits from the three equestrian faults of his team-mate Karim Laghouag, third at the end of the cross country, to move up in the final classification and take third place in the competition.

“I came to the CCI 4*-L Equi Action de Saumur Complet with the idea of obtaining a qualification for the mare, Amande de B’neville. She had already taken part in a few 4* races but without obtaining a ‘qualification’. I also wanted to see the country: I had excellent memories of Saumur, a competition that I had run as a Junior in 2005, for the European Championship. I knew it was a technical, demanding competition, and that’s what we needed. The mare had been seriously prepared, in particular on the CCI 3*-S of Radolfzell where she finished third. And Saumur allowed her to progress further. She is of course my lead mare since Samourai retired, and I had the impression, this weekend, that she was saying to me ‘Relax mum; trust me, we will perform together.’ And it’s true: she was wonderful; I have absolutely nothing to reproach her for! She is getting stronger and stronger. Physically, she is imposing, and has to continue to learn to contain herself, to deal with her boundless energy. I really think I will take her to a CCI 5* soon. In any case, that’s my goal, whether it’s next year or in a championship this year. Really, I had a great week at Saumur Complet and this victory is a great conclusion.”