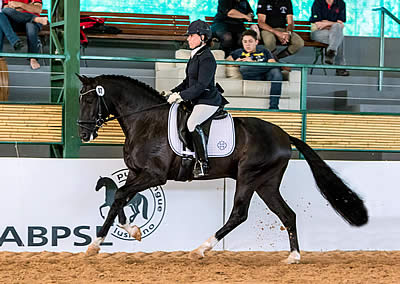 Itapira, Sao Paulo, Brazil (June 20, 2016) – April, May, and June have seen nothing but victory for Interagro Lusitanos of Brazil, with their team of horses and riders topping national and international classes in a variety of disciplines including working equitation, stallion licensing tests, and FEI dressage. Back to back, nearly weekly wins over the past few months are the most recent in a string of accolades won that have already made 2016 a banner year for the Brazilian-based stud farm. With the breeding season just beginning, Interagro’s living legacy for the modern Lusitano sporthorse continues to blossom in the competition arena and set the standard for the Portuguese breed on the world stage.

Baldor Interagro (Ofensor (MV) x Quinata Interagro) swept the Small Tour during the Sao Paulo CDI-3, held June 2-5, 2016, exemplifying the grace, athleticism, and poise required to compete and win in the upper echelons of dressage. Ridden and trained by Pia Aragao, the victory marks the gray stallion’s second sweep of the Small Tour classes, as the pair topped Sao Paulo’s first CDI-3 in March of 2016. In addition to his athletic ability and intelligence, Aragao, who has trained the stallion since 2010, cites Baldor’s presence and attitude as one of his biggest strengths: “This horse enjoys the spotlight, and when he enters the arena his beauty and personality are hard to miss! Nothing is difficult for him and I’m really looking forward to moving him to the Grand Prix. Collection is his forte, typical of the Lusitano, and I think he will be even more successful when he can really collect for the piaffe and passage.”

The pair received a personal best score of 72.350% in their freestyle, which includes up-beat, popular music from the hit show Glee. “The degree of difficulty in our freestyle is quite high, especially a line of two-tempis on the centerline that are bookended by pirouettes,” said Aragao. “The changes have to be perfectly straight for the judges, and while we had a lot that could be improved upon, I was thrilled with his rideability and our overall performance.”

Interagro’s prowess in the dressage arena also extends to the FEI Young Horse divisions, where the elegant black stallion, Fellini Interagro (Nirvana Interagro x Batina Interagro), has been racking up impressive scores in the 6-Year-Old classes. Fellini, also ridden and trained by Aragao, topped both of his classes with final scores of 7.14 and 7.50 at the Brazilian Dressage Championships, held in tandem with the Sao Paulo CDI-3*. In May, the pair took top honors in the FEI Six-Year-Old division at the CAN National Dressage in Sao Paulo with scores of 8.20 and 7.18.

Following his wins in May and leading up to his recent success at the Brazilian Championships, Fellini added a few more accolades to his brief but decorated show career at the International Lusitano Show in Tatui, Sao Paulo, Brazil: he and four other Interagro stallions were approved by the ABPSL Stud Book. Two of the stallions, Caudilho Interagro and Ditador Interagro, were presented for licensing by internationally renowned Portuguese trainer and competitor Jorge Sousa, and all of the stallions and their handlers spent a week in preparation with Sousa for the International Lusitano Show. Caudilho Interagro and Gladiador Interagro topped the field with scores of 75 and 74.5, with Fellini just a hairsbreadth away with a score of 74. Ditador Interagro and Empreiteiro Interagro were also licensed with scores of 72 and 68.5. Fellini wrapped up the International Lusitano Show by winning the FEI 6-Year-Old class with a 7.52, a victory that names him the 2016 6-Year- Old Champion of the State of Sao Paulo.

Sired by one of Interagro’s most successful Grand Prix dressage competitors, Fellini inherited Nirvana Interagro’s temperament, conformation, and exceptional gaits, which give him a winning edge in the show ring. “He has no weakness in his gaits,” stated Aragao. “His uphill canter and freedom through the shoulder are what make him standout as a dressage prospect and future breeding stallion. He and Nirvana are also very similar in their personality: very intelligent, easy to work with, and true performers. They love attention, both in and out of the show ring.” With Fellini schooling 3- and 4- tempis, as well as working pirouettes, Aragao plans to continue to develop the young stallion up the levels to the FEI.

Also in May, Aragao was recognized for her success in 2015 aboard another Interagro stallion, Zepelim Interagro. The pair was awarded the prestigious Special Senior Top honors from the Premio Brasil Hipismo 2015 for their performances at the Grand Prix level.

With waves being made in the dressage arena, Interagro’s working equitation accolades also continued to grow. Following Xaveco Interagro’s clinching of the Working Equitation World Cup at the end of 2015 and a week of preparation with Jorge Sousa, the second phase of the 2016 Brazilian Working Equitation Championship saw Feitor Interagro, ridden by Alexandre Souza, dominate the Young Horse B division, while Gotico Interagro and Divisadero Interagro, both ridden by Johnny Miranda, secured reserve champion in the Young Horse A and Intermediate division. Based in the daily activities and tasks required by working horses, the discipline was created with the objective of enhancing the equestrian techniques utilized by horses and riders in various aspects of ranch and field work. Blending power, agility, and rideability, many of the traits that make Interagro’s Lusitanos successful as sporthorses also cross over to working equitation.

Interagro’s success in the national and international show ring is a testament to their breeding program, a legacy over 40 years in the making. Established by Dr. Paulo Gavião Gonzaga in 1975, Interagro’s mission was to preserve and restore the original foundational Lusitano bloodlines and lineages, many of which were in danger of extinction following the Portuguese Revolution of 1974. Through meticulous breeding, Interagro evolved the exceptional qualities of the Lusitano breed while showcasing their talent, beauty, and intelligence, giving rise to a modern Lusitano sporthorse that excels in the FEI disciplines. Today their legacy continues as their horses compete across four continents.