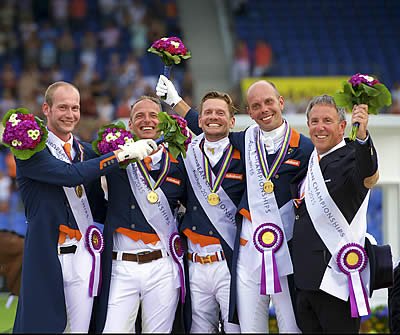 Lausanne (SUI), 2 November 2016 – Wim Ernes, Dutch national team coach and FEI 5* Dressage judge, has passed away after a battle against cancer. He was 58.

His proudest moments during six years as national team coach came at last year’s FEI European Championships in Aachen, when the Netherlands took team gold and individual bronze, and at the 1996 Atlanta Olympic Games, when they claimed team and individual silver and individual bronze. But these were just two in a long list of successes that threw the spotlight on Wim Ernes’ role as a highly successful and admired national coach.

His efforts to improve the quality of riding and level of judging is also well known, and judging at the London 2012 Olympic Games, three FEI World Cup™ Dressage Finals and at the FEI European Championships 2007 in Turin (ITA) were also major career highlights. When he was promoted to an FEI 5* judge in January 2008 he was one of the youngest ever to join the elite circle at that time.

Wim Ernes was also very involved in the breeding side of the industry, chairing the KWPN Stallion Dressage Selection Committee for three years until November 2015, having previously worked extensively within the Committee for five years before taking over as Chair.

In recognition of his huge contribution to equestrian sport in the Netherlands, Wim Ernes was earlier this week honoured with the prestigious golden KNHS award by the Royal Dutch Equestrian Federation (De Koninklijke Nederlandse Hippische Sportfederatie).

“With the death of Wim Ernes, Dutch elite sport has lost a very special coach with a personal style of working,” High Performance Director at the Netherlands Olympic Committee Maurits Hendriks said. “He was open and believed in the power of sharing.”

“Wim possessed the ability to connect people to work together and create an atmosphere where everyone felt at home,” High Performance Director and Secretary General of the Royal Dutch Equestrian Federation (KNHS) Maarten van der Heijden said.

Frank Kemperman, FEI Executive Board member and Chair of the FEI Dressage Committee also remembers Wim Ernes fondly. “Wim was an all-round horseman with a heart for Dressage. He was also a really focused judge and a man who was always coming up with new ideas for the sport. We will miss him intensely.”

Former FEI Dressage Director Trond Asmyr also spoke warmly of him. “Nobody ever had a bad word to say about Wim. He was one of the sport’s most respected judges and made a real difference to the level of our sport in many countries.”

The FEI extends its sincere condolences to the family and friends of Wim Ernes, to the Royal Dutch Equestrian Federation and the global equestrian community.