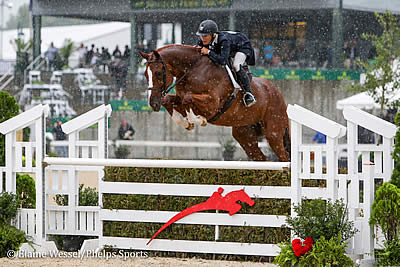 Lexington, Ky. – Aug. 17, 2018 – Celebrating its 10th anniversary, the 2018 USHJA International Hunter Derby Championship returned Friday to the Kentucky Horse Park for the first of two days of competition, bringing along with it 83 of the country’s top hunter horses and athletes. Since 2012, the program finale has steadily increased in prize money, and this year is no exception, with the overall purse nearing $300,000, a welcome incentive for the collection of skilled entries. With only 40 slots in Saturday evening’s championship handy round up for the taking, competitors needed to showcase themselves well enough to earn a place in the top half of the scorecard to retain a shot at the title. Rising to the challenge in the face of an onslaught of rain, Tybee carried Holly Shepherd to the highest marks of the day to emerge as the early front-runners ahead of a field comprised of both veterans and newcomers.

The 2018 championship, held inside the Rolex Stadium for its ninth year, featured a 12-effort track from designer Alan Lohman, who chose to implement plenty of lofty oxers and the standard four high-option fences for exhibitors to highlight their precision and scope. As the 10th pair in the order-of-go, Jamie Taylor aboard Iwasaki and Reilly’s Small Kingdom set the bar high for subsequent contenders with a total tally of 266 points. The top slot soon changed hands, however, as three-time champion and veteran hunter rider Liza Boyd piloted Maggie Hill’s Tradition just nine trips later to the first 90 score of the day, accompanied by an 86, 89 and 12 bonus points to overthrow the early leaders with a whopping 277 points. Intermittent downpours of rain plagued the morning, and Shepherd and Holly Brown’s Tybee were one of the unlucky pairs to have to face the elements for their classic round. The skilled duo overcame the added difficulty, earning scores of 88, 91 and 92, in addition to 12 bonus points, for cumulative marks of 283 to usurp Boyd and Tradition for the throne with more than 50 partners still left to ride.

As only the 25th to take their turn around the ring, Shepherd and Tybee anxiously waited to see if their place atop the leaderboard would hold. On her second ride of the day, reigning champion Victoria Colvin and Brad Wolf’s Private Practice gave the top contenders reason to worry, electing to jump all four high-options and pulling in a total score of 279, just four points shy of the lead. As 54 more entries continued to come forth throughout the morning and afternoon, many with the benefit of sunny skies, the cut-off score for 12th place continued to rise, ultimately settling on 267.50 as challengers consistently illustrated exceptional rounds that raked in scores in the 80s. However, none were able to catch the leading trio of Shepherd, Colvin, and Boyd, each of whom rode within the first 30 in the line-up and only a few trips from each other.

Heading into the final handy phase of competition, Shepherd and Tybee will face off against a group of top talent, aiming to retain their spot at the head of the class as the last to ride Saturday. Just points off the lead, Colvin undoubtedly hopes to match her 2017 results, jumping from third place after the classic round to the championship tricolor and largest prize money check of the competition thanks to a standout handy portion. No stranger to the winner’s circle and always a threat to the leader, Boyd managed to maneuver her way into both the third and fourth place spots with Tradition and Finally Farm and Westerly Farm’s Clemens, respectively. Tied with Clemens’ score of 276.50 is Tracy Freels’ Red Ryder with Hannah Isop at the helm, while Jenny Karazissis held the reins on the sixth highest-scoring horse, Dulcie Lou Morris’ Big Shot.