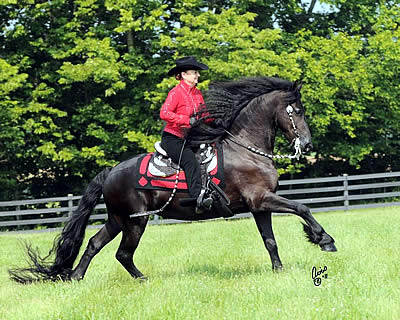 February 5, 2016 — Pleasureville, KY – Black Horse Manor hosted a Friesian Boot Camp, January 30-31, 2016. The weekend was a fun-filled, educational package that allowed Friesian owners to bring their own horses to the facility for one on one personal training attention.

The goal of the one on one sessions was to address a variety of training challenges, tackling horse show related goals, and training tips for perfecting and polishing horse show performance. Well known multi-titled World Champion, owner and trainer of Black Horse Manor, Jannie Giles, worked with each individual and their personal horses, focusing on their 2016 goals.

Jannie sits on the Board of Directors for the International Friesian Show Horse Association (IFSHA) and is also a member of the USEF Rules Committee. Her professional career has been well documented with Regional and National wins with American Saddlebreds, Friesians, Arabians, Half Arabians and National Show Horses. She was the first woman to win the National Show Horse Five-Gaited National Championship. She also instructed a number of champion Saddle Seat Equitation riders to national titles as well.

Jannie took her very first Friesian from an average school type horse and turned him into a show ring legend. Jannie and her star gelding, Robin ut de Warren, dominated the show ring from coast to coast. Together they enjoyed the incredible run of six undefeated seasons competing against World and National Champions from various breeds.

By setting the standard of excellence in the Friesian saddle seat and western divisions, Jannie is considered one of the most talented and respected trainers nationwide. Jannie’s outstanding Western Pleasure Friesian, Victor FC, was the first ever Friesian to be awarded the 2011 USEF Equestrian of Honor Barbara Worth Oakford Trophy.

Black Horse Manor, is located just a few short miles from Shelbyville, KY, off I-64, and offers training, lessons and sales for a select group of Saddlebreds, Morgans, Friesians and Hackneys.

For more information, contact Black Horse Manor at janniegiles@aol.com or 859.321.9278.