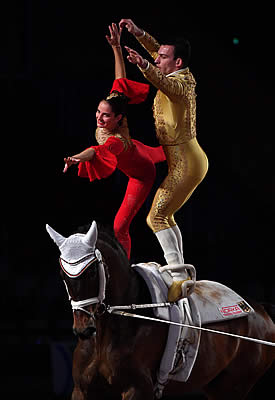 Saumur, France hosted the warm-up of the FEI Vaulting World Cup Final. Even if the warm-up does not count for the final classification that will determine the winners of the FEI Vaulting World Cup Final 2019, it was important at least for two reasons: “The warm-up allows to determine the starting order for tomorrow’s test, the first test on the two which will be taken into account in the final classification,” explains Davy Delaire, coach of the French vaulting team. It was also very important for the familiarization of the horses with the environment of the competition. For the first time organized in Saumur, the competition takes place in the splendid Grand Manège, where usually the riders of the prestigious Cadre Noir de Saumur perform.

For the Female category, the surprise comes from Germany’s Kristina Boe, defending champion, two-time world champion (individual and in the Nations Cup) and reigning European champion, who runs in Saumur her last competition before retiring and points to the last place of this warm-up. But let’s repeat: this warm-up is not taken into account for the ranking that will determine the winner of the FEI Vaulting World Cup Final. Her compatriot Janika Derks, team world champion in 2014 and team European champion in 2015, finishes at the top of this warm-up. She is followed by Switzerland’s Nadja Buttiker, second, and Marina Mohar, Swiss vaulter as well, third. Nadja Büttiker finished second in the World Cup Final last year, behind Kristina Boe. Switzerland’s vaulter will be eager to take her revenge in Saumur.

On the men’s side of the competition, it was a great start for the one who broke all the acclaimed records, the Frenchman Clément Taillez, the only French representative in the three categories of this FEI Vaulting World Cup Final. He finishes at third place in the warm-up, behind German Viktor Brusewitz, second, and the surprise of the evening, the Colombian Juan Martin Clavijo, first. Juan Martin Clavijo was world champion in 2015 and 2017, and is a real star in Colombia: he is the first athlete who won gold in an international championship, all equestrian disciplines combined. He was vaulting on an orthodox choir of men: splendid!