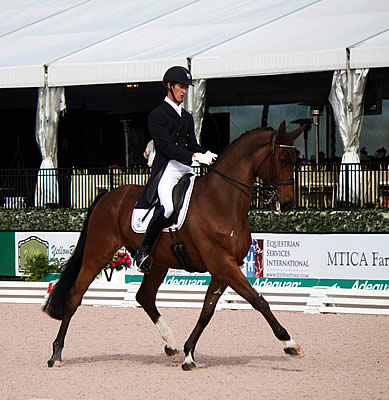 Wellington, FL (February 19, 2016) – Canada’s 2015 Pan American Games team silver and individual bronze medalist Chris Von Martels is known not only for his exemplary skills in the saddle, but also for his professional conduct and humble attitude towards his achievements. Premier Equestrian, an innovative company known for providing advanced riding arena systems throughout the United States, recognized Von Martels for his many accomplishments this past year at the highest level of dressage and rewarded him with the title of “Premier Equestrian” at the 2016 Adequan Global Dressage Festival in Wellington, Florida.

Premier Equestrian presented Von Martels with a tri-colored ribbon, an engraved plaque, and the title of “Premier Equestrian” for his exemplary skills, sportsmanship, and achievements in the dressage world. Von Martels, of Ontario, Canada, is consistently a strong contender at the Grand Prix level in prestigious competitions. He is based in Wellington during the winter, where he trains with fellow Canadian Ashley Holzer.

“I absolutely think that good sportsmanship is essential,” Von Martels explained. “I think it is very important that everyone remembers that we are all here on an equal level.”

When asked how he maintains a positive attitude through the ups and downs of intense international competition, Von Martels said, “You can have good days and you can have difficult days. It’s nice when you have your peers and sports colleagues to be there for one another – of course when you’re winning, but also more importantly when you are having a difficult time. I think that support is very important.”

Von Martels has a few star equine partners at the Adequan Global Dressage Festival this season. Later this season, he plans to get his two-time Pan American Games medalist partner Zilverstar, a 12-year-old KWPN gelding, back into the show ring. He also plans to compete with his up-and-coming Grand Prix mount Bellissimo, a 13-year-old Danish Warmblood gelding. Von Martels is now actively campaigning with Divertimento, a 14-year-old Westfalen gelding also known as ‘Divert,’ who previously competed on a Swedish Nations Cup team with Swedish Olympian Tinne Vilhelmson-Silfvén.

“Divert and I are a new combination since just around the holidays, and we are all very excited and hope to have some great results in the future,” Von Martels said.

The Premier Equestrian Award will be presented each CDI week during the twelve-week Adequan Global Dressage Festival to honor riders who are not only competitive, but also kind and gracious to other competitors and show staff, put their horses first, and contribute to a positive overall atmosphere on the show grounds. Premier Equestrian hopes that this award will let competitors know that their outstanding attitudes are noticed and appreciated, and will encourage all riders to enter the show ring in winning spirits.

Premier Equestrian is proud to offer continued support of the dressage community as an Official Partner and Sponsor of the 2016 Adequan Global Dressage Festival show series. The company offers high-quality and affordable products to dressage riders – including premier dressage arenas, world-class arena footing, revolutionized horse jumps, and accessories. For more information about the presenter of the Premier Equestrian Award, visit www.PremierEquestrian.com or call 1-800-611-6109.