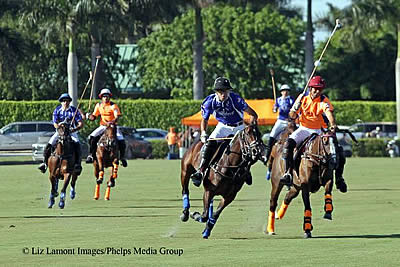 Wellington, Florida – April 1, 2015 – Valiente defeated Las Monjitas 13-12 in overtime Wednesday at the International Polo Club Palm Beach (IPC) in bracket play for the 111th U.S. Open Polo Championship. It was the first time in the 2015 season that the two teams have played each other, and both had been defeated in their previous game in the tournament.

There’s always a big question mark hovering over the field when Adolfo Cambiaso doesn’t play for Valiente, as has happened a few times this season. Can Valiente pull it off without the maestro in charge on the field?

Sapo Caset, with the assistance of his teammates, put that question to rest in Wednesday’s match against La Monjitas. While there is only one Adolfo Cambiaso out there, Caset did a mighty job of filling his boots. Riding in the 10-goaler seat for a second consecutive game, Caset carried Valiente to victory, socking in the winning goal in overtime (to cap off his previous four).

Caset wasn’t the only Valiente player who had to step up to the plate. The other was a gob smacked Tommy Beresford, who was thrown into the mix Wednesday as abruptly as Caset had been in last week’s match. As the third chukker was about to begin, the young British player found himself being hoisted onto one of Bob Jornayvaz’ horses and pointed toward the field. Team captain Jornayvaz had injured his tailbone but rode it out through the second chukker. He gave Beresford a vote of confidence during the break, and then out on the field appeared a tall, lanky player sporting a blue jersey with a number five on his back (in deference to Jornayvaz, who had been wearing the number one jersey). If you weren’t hip to the backstory, it might have appeared to be an April Fool’s prank: a 26-goal polo team playing positions two, three, four – and five?

But this was no joke, particularly to Beresford. “I was a bit nervous. This was my first 26-goal game!” he said afterward, leaning on his chair and looking at the ground as though trying to fathom what had just happened. Although he had played a couple of practices with the Valiente squad, the 18-year-old said he didn’t feel he played “quite up to scratch today – but we got the win.”

Indeed they did, and Beresford was a big part of it, contributing a goal of his own in the sixth chukker. Guillermo Terrera promptly added another for Valiente. Caset followed up in his typical clutch player fashion, making not one but two golden goals: the one that tied the game at 12-all at the end of the sixth chukker, and the next on an assist from Terrera, which won the game in overtime.

It was a painful outcome for Las Monjitas, a powerhouse that also lost its last U.S. Open match against Coca-Cola by a single point. Just as it had Saturday, Las Monjitas held its own all the way through the game against Valiente, even keeping its opponent scoreless in the second chukker.

Facundo Sola was a force of nature for Las Monjitas, scoring 10 of his team’s 12 goals by way of making two goals in every chukker except the sixth. Sola injected a high-voltage direct current into the game as he swarmed the field nonstop. When he wasn’t scoring, he was pouring the pressure on any blue jersey within his wingspan. He consistently converted his penalty shots. At the top of the third chukker he made back-to-back goals, the first on a penalty four and the next on a run down the field with Caset on his tail, both going mach-nine hair-on-fire.

The game was tied 6-6 at halftime, and the score continued to zing back and forth between a tie and a one- or two-point spread. In a repeat performance from the first chukker, Caset made his mark in the fourth by catapulting another pass from the 150-yard line to Taranco, who had pulled out ahead and was patiently waiting downfield. Exactly where he needed to be, Taranco jumped on the play and was off and running with the ball, taking it straight into goal.

The fifth chukker opened at 8-all, but Las Monjitas soon moved into a two-point lead. Eduardo Astrada put his stamp on the sixth chukker, scoring from the field while shaking off intense pressure from Caset. Astrada, who seems to thrive on pressure scenarios, calmly paddled the ball downfield and made three smooth hits, the third one sending the ball cruising into goal. Beresford, Terrera and Caset made the next three goals in quick succession, tying the game 12-12 at the end of regulation play.

In overtime, Sola looked like he had it made for Las Monjitas, taking his time with the ball until he found a window and shot. But Beresford pounced on the ball and bought some room for Terrera, who passed it to Caset for the winning goal.

Of the five U.S. Open matches played to date at IPC this season, this was the third that went into overtime. As one spectator said of the exciting play, “It’s like every game is a final.”

Caset said Valiente was like “a totally new team,” given that half of its lineup had suddenly changed and that Beresford came in in the middle of the game. In a nod to Las Monjitas, Caset said he felt that the play had been fairly evenly matched, although he remained confident throughout that Valiente would prevail. “I never thought for a moment that we would lose.”

Terrera, with a bit of frustration, said, “We wanted to play our game, but we couldn’t because they kept trying to slow it down. So we said, ‘Whatever it takes, let’s do it.’ Luck was on our side” – and so was Cambiaso, who remained a guiding force from the ground.

Goose Creek defeated Tackeria 14-13 on Tuesday, March 31, at IPC. Goose Creek will oppose Valiente in the Patriot Cup Final at IPC on Friday, April 3, at 4 p.m., preceded by the Heroes Cup subsidiary at 10 a.m.