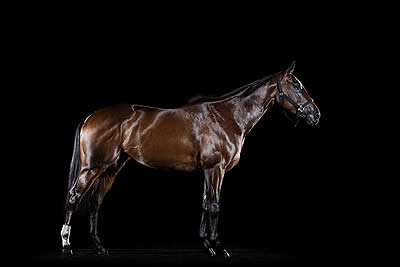 Oxfordshire, UK (November 6, 2018) – The sport of kings got a taste of art this summer, as a host of celebrities, royalty, and some of the best handicapped polo players in the world descended on the Black Bears Polo Club outside of London for the 2018 British Polo Days. An unprecedented social and sporting event, the stage for this prestigious charity polo exhibition was set by a selection of artwork, including a large print of Adolfo Cambiaso’s cloned champion polo mare, Dolfina Cuartetera B09, donated by photographer Ramon Casares. Known for his dramatically illuminated and detailed artistic animal and equine portraits, Casares has been photographing horses and wildlife for famous polo teams and conservation societies around the world.

As a family, the Cambiasos of La Dolfina Polo Team hosted the La Dolfina Sunset Polo and Gala during the Polo Days. Designed to raise funds and awareness for Prince Harry of England’s charity Sentebale, which supports mental health and well-being of children and young people affected by HIV in Lesotho and Botswana, the Polo Days exhibition featured some of the top players and patrons of polo in the world, including Pelon Stirling and Juan Martin Nero, ten goal handicapped players of La Dolfina Polo Team, Cambiaso’s patron Bob Jornayvaz, young talent in the form of Cambiaso’s son and daughter, Poroto and Mia, Prince Harry himself, and a slew of famous spectators including the newest member of the house of Windsor Meghan Markle and tennis superstar Serena Williams. The two exhibition games were also highlighted by exclusive parties and a large fireworks show.

Casares’ contribution of a fine art print of Cuartetera 09 scratches the surface of the artist’s support of both humanitarian causes and wildlife conservation. In addition to portraits of some of the world’s top polo and sport horses, his rescued wildlife series BROKEN highlights both rare and common rehabilitated species on multiple continents. The intimate portraits and stories behind each animal provide a captivating look at the power, fragility, and complexity of nature.

Building on influences from his background as a native of Argentina and career as an exotic animal caregiver at the country’s largest zoo, Casares expanded his photographic talents to include all species of creature, from human and equine to possum and crocodile. He has photographed animals from nearly every phylum, class, and order in the animal kingdom. With Casares Fine Art Photography appearing across the globe and garnering international acclaim, his images have captured the imagination of audiences at major media outlets and international art shows.

But despite his passion for the horses and traditional commissioned work, Casares’ portrait style images of nature’s rarest and most common species are the artist’s true accomplishment and calling card along with his trademark style devoid of background distractions and illuminated to detail each whisker, feather, or scale. Casares captures an essence with each image that underscores his own passion and vision as a photographer and conservationist. As a former keeper for the Buenos Aires Zoo, Casares was witness to the beauty, ferocity, and fragility of the animal kingdom firsthand. During the evolution of his photographic career, he began to visit wildlife rescues to document the plight of their patients. Realizing his images could generate support and awareness for those injured and recuperating commonplace species, as well as those who are in danger of extinction, Casares embarked on a mission to unite his talent for photography with his passion for conservation. Broken was the result.

Combining Casares’ distinctive artistic style and the plight of rescued animals, Broken is the final product of 3 years’ worth of photography, the resilience of each animal, and the selfless efforts of their rescuers. In the oversized fine art book, the saga of each animal is told beside their stunning and emotionally evocative images with the goal of bringing awareness to their struggle and rehabilitation. An ever-growing endeavor, Casares intends to expand the Broken: Rescued Wildlife Fine Art Project to multiple countries and continents to maximize awareness and resources for endangered wildlife.