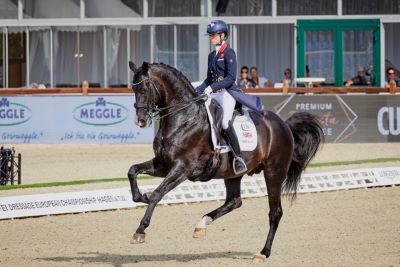 On a day full of fascinating stories and great sport, Great Britain took the early lead in the Team Competition at the FEI Dressage European Championship 2021 in Hagen, Germany. Gareth Hughes was first to go for the British side, posting 74.394 with Sintano van Hof Olympia, but it was their second-line rider, Charlotte Fry, who boosted them to pole position when producing a brilliant test with her Olympic bronze medal winning ride, Everdale, when second-last to go.

Judges Susanna Baarup (DEN), Thomas Lang (AUT), Maria Colliander (FIN), Isabelle Judet (FRA), Isobel Wessels (NED), Henning Lehrmann (GER), and Mariette Sanders van Gansewinkel (NED) awarded the pair a mark of 77.671 to leave them over two percentage points ahead of next-best horse/athlete partnership, Denmark’s Nanna Skodberg Merrald and Atterupgaards Orthilia, who put 75.078 on the board. To the surprise of many, it is the Danes who lie second going into the second half of the Team event ahead of the defending champions from Germany in third.

Skodberg Merrald was delighted with the result she produced with the 16-year-old mare formerly ridden by both Britain’s Fiona Bigwood and Danish star Agnete Kirk Thinggaard. “I’ve had her for less than a year and this was the best Grand Prix I’ve ever done with her! I’m very happy that I did all I could for the team, and I couldn’t ask for more. It was what I’ve been dreaming about!” she said.

For Germany, however, things didn’t quite start as expected, although Dorothee Schneider set the early target with a nice performance with Faustus for a mark of 74.965. “It’s the first championship for him and I think it was a good start for the team,” she said.

Her score might have been higher but for two mistakes in passage. “Sometimes when he’s not confident he tries to come behind me, and then I want to ride to the bit and there’s one or two moments when he’s not directly going to the bit and we have a mistake,” she explained. “His highlights were really the canter. It needs a bit of time to close this big canter and to balance him, but he comes more and more in a good balance. I’m proud of him!” Schneider added.

However, compatriot, Helen Langehanenberg, followed with a score of 73.960 with Annabelle.

“She started super good but then there were some expensive mistakes, so it is different than we hoped, but that’s OK – this is the sport!” said Langehanenberg’s team-mate, double-Olympic gold medallist and new world number one Jessica von Bredow-Werndl.

Hughes, who slotted into individual fourth place at the end of the day, was happy to have given the British a solid start. He travelled all the way to Tokyo as team alternate but didn’t get to ride, so entering the ring was a big relief.

“I woke up 30 times last night; it feels like we have been building up to this for three months. It was great to be in Tokyo but emotionally it was really difficult because you have to prepare to ride and then you don’t ride. Your adrenalin goes up and down. It’s weird because you didn’t get what you want to do which is help the team. And then we had the build-up to this,” he explained.

Fellow-Briton Fry admitted that she’s just running on adrenalin right now. After Tokyo she travelled to Verden in Germany, where she claimed the Six-Year-Old title at the FEI WBFSH Dressage World Breeding Championship with Kjento, posting incredible scores. Just over a week later, she is making the headlines at the European Championships.

“It’s been a great few months and Everdale has been amazing,” she said. “He came home so fresh from Tokyo, excited and ready to go again. He had a week off last week. I got back on Sunday and he was feeling great still. His energy never runs out; he goes all day and he loves to work,” she pointed out.

She said he has definitely grown up since travelling to Tokyo and that he has grown more secure in the arena. “He hasn’t been tired at all, and today it really felt like we could just wait and enjoy it. I could take my time a bit more. It was a really nice feeling,” she said.

There is still another whole day of sport ahead before the Team medals are decided, and with the incredible Isabell Werth yet to go for the host country with Weihegold and British stars Carl Hester (En Vogue) and Charlotte Dujardin (Gio) also yet to strut their stuff, there’s a lot more to look forward to.

But some athletes achieved something great just by competing at Hagen.

For Sweden’s Jacob Noerby Soerensen, there were mixed emotions. Just two months ago a terrible fire destroyed his farm, and he’s still shocked from the experience.

“I was in Denmark qualifying two horses for Verden, and on my way home I got a call from the stable that there was a fire. They didn’t think it would get so big but the whole stallion stable and the apartments and the Rehab Centre with a spa and gym for the horses were burned down. It was awful. In half an hour everything was gone. No horses were killed and the staff were super; they rescued 26 horses in half an hour, but it was a horrible, awful day,” he recalled.

So posting 68.431 and lying individually 20th. he was hugely happy with his 11-year-old stallion Moegelbejergs Romeo. “He’s a big horse; he’s only 10 and it’s my first championship, so I was really, really nervous. But today made everything feel good again!” he said.

Also feeling good was Ireland’s Carolyn Mellor, who steered Gouverneur M to a score of 64.395. She’s 59 years old, groomed for some of Ireland’s top riders, grooms her own horse, lives in Comber in Northern Ireland, has competed mainly on the relatively modest Irish circuit throughout her career, and is riding a 10-year-old horse who she bought as a three-year-old and who, like her, is competing in his very first championship. And she became a granny last month.

“It’s very surreal. I never thought I’d make it to this stage but it’s brilliant and I think with this horse there is much more to come!” she said.