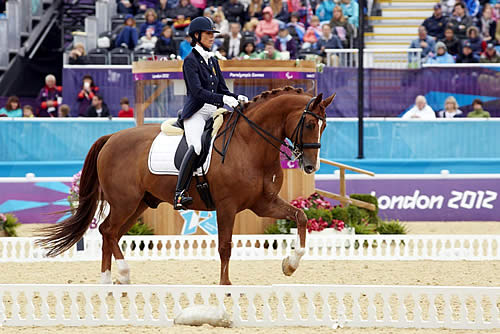 Michèle George (BEL), pictured here with FBW Rainman on their way to Paralympic gold at London 2012, has been shortlisted for the 2013 Paralympic Sport Awards. ©Liz Gregg/FEI.

Lausanne (SUI), 5 September 2013 – Michèle George, the Belgian Para-Equestrian athlete who made her Paralympic debut a winning one with two gold medals at London 2012, has been shortlisted for the 2013 Paralympic Sport Awards.

The 39-year-old Belgian rider, who competes in Grade IV, is one of three shortlisted athletes in the Best Female Games Debut category. She is the first Para-Equestrian athlete to have been shortlisted in the history of the awards.

Michèle George was Belgium’s first Paralympic equestrian gold medal winner since the IPC added the sport to the programme in 1996. Her London 2012 gold medals came in the Individual and Freestyle tests with the then 10-year-old FBW Rainman. She rode the same horse to Freestyle silver at the Alltech FEI World Equestrian Games in 2010 and Freestyle silver at the 2009 European Championships in Kristiansand (NOR).

“I was really honoured even to be nominated for this award, but now I’ve been shortlisted it’s just unbelievable,” Michèle George said. “Winning two gold medals at London 2012 was a dream come true and I’d like to thank everyone who has helped me on this incredible journey. If I do win the award, it will be the best possible reward for all the hard work everyone has put in.”

“It is very exciting news that Michèle George has been shortlisted for this award,” FEI Para-Dressage Committee Chair Ulf Wilken said. “It is really wonderful that Para-Equestrian sport is getting such public recognition from IPC members. Michèle is a great representative of the sport and we wish her the best of luck when the winners are announced later in the year.”

The 2013 Paralympic Sport Awards ceremony will take place in Athens (GRE) on Saturday 23 November, when six awards recognising achievements at the London 2012 Paralympic Games will be presented. A total of 15 athletes, who between them won 38 gold medals in London, have been shortlisted for the six categories, which are: best female, best male, best female debut, best male debut, best team and best official.

This year’s awards have attracted a record number of nominations from members and, as a result, the IPC decided to split the Best Games Debut award into two categories for males and females.

The other two athletes shortlisted in the Best Female Games Debut category are Johanna Benson (NAM), who became the first Namibian to win gold in either the Olympic or Paralympic Games when winning the 200m T37 and also took the 100m T37 silver; and Marlou Van Rhijn (NED), who followed up winning 100m and 200m European titles in June by claiming the 200m gold and100m silver in London.

The International Paralympic Committee (IPC) is the global governing body of the Paralympic Movement. The IPC supervises the organisation of the Summer and Winter Paralympic Games, and serves as the International Federation for nine sports, for which it supervises and co-ordinates the World Championships and other competitions.

The IPC is committed to enabling Paralympic athletes to achieve sporting excellence and to develop sport opportunities for all persons with a disability from the beginner to elite level. In addition, the IPC aims to promote the Paralympic values, which include courage, determination, inspiration and equality.

The FEI took over as the governing body for Para-Equestrian in 2006, one of the first international governing bodies to govern and regulate a sport for both able-bodied and disabled athletes.

With the idea of creating opportunities for all people with disabilities to compete and achieve their goals in equestrian sport, athletes are classified according to the level of their disability/impairment.