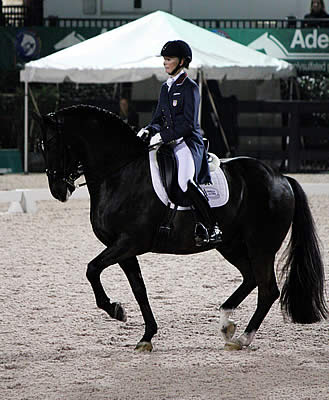 Wellington, Florida (March 7, 2016) – International Grand Prix dressage rider and trainer Katherine Bateson-Chandler and her partner, 11-year-old KWPN gelding Alcazar, owned by Jane F. Clark, have had a notable campaign so far this year in the Grand Prix division throughout the Adequan Global Dressage Festival. Their efforts came to fruition this past week during the Palm Beach Dressage Derby CDI-W, sponsored by Everglades Dressage. The pair emerged as the highest placing American duo in the Grand Prix Freestyle with a 73.45 percent.

“He was quite nervous in the warm-up, and he’s been pretty solid the past couple of times that I’ve gone under the lights,” said Bateson-Chandler after her impressive ride e in front of a packed house at the Adequan Global Dressage Festival. “It threw me a little bit in the warm-up, but he came into the ring and actually is learning that it is his safe place, and he settles,” she said. “He’s still a green horse and is getting used to having more atmosphere, which is why I keep putting him into more ‘under the lights’ situations. He keeps stepping up to the plate, and I’m really proud of him.”

At last year’s Palm Beach Dressage Derby CDI-W, Bateson-Chandler and Alcazar took first place, which marked the horse’s breakthrough performance in the Grand Prix level. That 2015 CDI class was their first, after competing successfully in the national Grand Prix classes throughout that winter series.

Bateson-Chandler plans to compete with Alcazar in the remaining two CDIs at the 2016 Adequan Global Dressage Festival, which will occur during Week 10 and Week 12.

“It’s a long season here, and you can get greedy with so many international shows. I have taken a couple of CDIs off, so he’s going to do the last two that are here because they’re spread out a bit more,” Bateson-Chandler noted.

After the completion of the 2016 winter competition series, the pair plans to return to England for the summer, where they will train with coach and mentor Carl Hester.