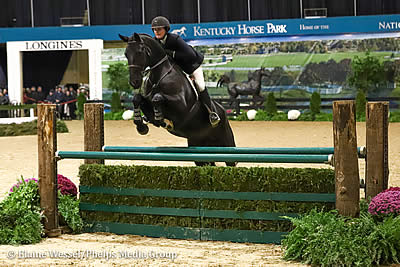 Lexington, Ky. – Nov. 3, 2019 – On the final day of its 136th anniversary, the National Horse Show welcomed junior equitation riders to the Alltech Arena for the ASPCA Maclay National Championship, presented by Chansonette Farm, the last of the four major equitation finals held each fall season. The National Horse Show has come to be known as one of America’s premier indoor equestrian events thanks to its rich history and classical traditions, one of which is the prestigious championship that is regarded as one of the most coveted equitation distinctions in the sport. Since 1933, an elite junior rider’s name has been etched into history as the annual champion, and this year the deserving victor was 18-year-old Ava Stearns, who topped the scorecard during her final junior year ahead of 175 athletes to capture the tricolor honors as the 2019 ASPCA Maclay National Champion and winner of the esteemed ASPCA Horsemanship Trophy.

Throughout the majority of the day, entries contested designer Bobby Murphy’s course one-by-one in attempts to showcase their abilities over the expertly created 14-effort pattern. The efficient course featured a diverse collection of fence types ranging from sturdy to airy, with the majority of the jumps not implementing standards, and was a nod to popular obstacles of the past as Murphy incorporated a series of fences that were reminiscent of those seen in previous generations. Exhibitors were offered fair opportunities to shine or fall short, with a forward 5-stride line, a collected 6-stride line, two in-and-outs, and an obstacle jumped twice both directions all integrated into the course.

Faced with the task of whittling down the initial start list of 176 pairs to only the top 25 performers, judges Jimmy Torano and Tamara Provost ranked the collection of participants who had earned a callback into the next rounds of competition. As the 92nd to ride in the original order-of-go, Stearns, riding Acer K, proved to answer Murphy’s questions the best as they exemplified the pinnacle of equitation, completing a textbook trip to jump to the head of the standby list following the first phase of competition. Headed into the under saddle and second over fences portions of riding, Stearns, Isabelle Song, Breanna Bunevacz, Emma Fletcher, Alexa Aureliano, Juliette Joseph, Catalina Peralta, Jordan Toering, and Savannah Hemby were pegged as the frontrunners, all riding head-to-head in the same flat section.

During the under saddle phase, riders’ balance and strength, as well as their horses’ adjustability, were put to the test through a series of directives from the judges, which included lengthening of stride, flying changes, and changes of gait, most of which was done without stirrups. Thanks to impeccable showings, both Bunevacz and Fletcher managed to usurp the early leader to claim the first and second positions, respectively, ahead of the final over fences phase. Hemby, Casas, Pielet, and Griffiths also performed well and leapfrogged up the ranks to inch that much closer to the top spot.

Returning in reverse order of the standings for their last chance to display their skills, all of the top 25 contenders navigated the Alltech Arena once more in an effort to either win the competition or force a work-off. With the points too close to make a championship decision yet following the second jumping phase, the judges requested a final test for six riders, which included highest-placed Stearns, Fletcher, Casas, Hannah Hoch, Sophie Gochman, and Elli Yeager. Originally outside of the top six, Hoch, Gochman, and Yeager were each able to maneuver their way up the leaderboard to keep them in contention.

For their final ride-off, competitors were asked to canter directly to fence one, counter-canter fence 11, canter fences 12a and 12b, canter to fence 13 in six strides, halt, canter fence eight, hand gallop fence five, and exit at the walk. The first five partnerships each turned in solid performances with no major errors, keeping the competition tight as the final entry walked through the arch for the last over fences trip of more than 200 throughout the day. As the ultimate challenger to ride, and with the lead to lose, Stearns jockeyed Acer K to an exemplary and seemingly effortless round, concluding the day’s activities on a high note with her precision, correct form, and aid effectiveness. After waiting through the nerve-wracking announcement of results, Stearns was rewarded for her superior efforts with Acer K as the 2019 ASPCA Maclay National Champion.

As the 2019 victor, Stearns’ name now sits amongst some of the sport’s greatest athletes and icons, including past winners such as Bill Steinkraus, Frank Chapot, Lillie Keenan, Victoria Colvin, and 2018 winner Sam Walker. Even more impressive is the fact that the junior rider claimed the championship aboard 8-year-old Acer K, North Run’s gelding who has just completed his first indoor season competing in the equitation finals. Though their partnership is relatively new, Stearns and Acer K have already achieved an incredible amount of success together, earning the reserve champion honors in both the 2019 Platinum Performance/USEF Show Jumping Talent Search Finals – East as well as 2019 Washington International Horse Show (WIHS) Equitation Final, in addition to topping the inaugural Dudley B. Smith Equitation Championship at the Great Lakes Equestrian Festival during the summer. As the trainers of the winning rider, Missy Clark and John Brennan of North Run were also awarded a one-year lease of an Audi, courtesy of Audi of Lexington.

Sunday’s competition concluded the 2019 National Horse Show, but the equestrian event will return in 2020 to once again host the ASPCA Maclay National Championship.