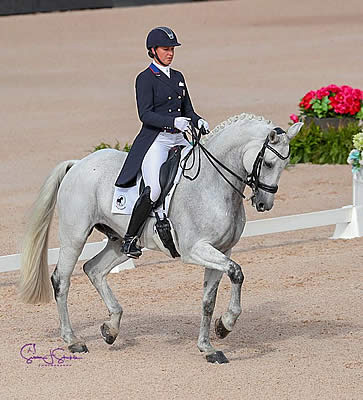 For Lyle and the 2008 Dutch Warmblood gelding (Rosseau x Riverman) owned by Duval Partners LLC, their clean test was “a big deal” and full circle from their first National Grand Prix competition at TIEC exactly a year ago, she explained.

“At this show a year ago we did our first National Grand Prix, so he’s only been in Grand Prix competition for a year. It’s always been about getting him [to] focus,” she elaborated, “and not get flustered and get through a test without mistakes, so this is a really big accomplishment.

“He hasn’t shown that many places in his life, and we’ve only been at [Adequan® Global Dressage Festival] all season, so this is new for him. I love this showgrounds – it’s maybe my favorite showgrounds in the world to show – but it’s great for the horses to get to come to a new place and ride in a new stadium with atmosphere like this. It’s really fun.”

Her young mount showed great composure despite several rain delays through the day, and “is always ready to go,” she revealed. “He’s a horse that I get out several times before his test, tack-walking and hand-walking a lot, so he’s in and out a lot through the day. [Today] we had to wait a bit, but that’s just part of the game. The good thing about him is he’s always ready to go – he has endless energy. So when we throw the tack on, he’s ready for it, no matter when that is.”

Lyle called Tryon International Equestrian Center (TIEC) at Tryon Resort the ideal stepping stone for her next challenge with Harmony’s Duval: taking on Europe. “I wanted to come to this CDI to get one more show in before we go to Europe this summer. I think this is a really good stepping stone to get him some exposure and solidify him a little bit more. He got a grant to go to Europe this summer from the USDF that will help fund him there,” Lyle continued. “He was US bred and born, so he’s never been out of the country. He’s a really wonderful horse – we’ve had him since before he was saddle-broke, so it’s a fun culmination of many years of work with him.”

Before Europe, Harmony’s Duval will take on the FEI Grand Prix Special CDI 3*, which Lyle predicted will feature his strongest work: “We’re on to the Special on Sunday, which is always a really strong test for him. His piaffe and passage work is always a highlight for him, so I’m really, really excited about him,” she concluded.